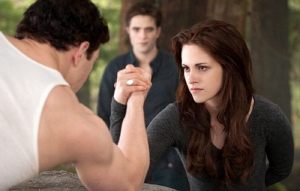 While it looks like The Twilight Saga: Breaking Dawn Part 2 will gross around $135 million this weekend -- no small feat, and certainly one of the top five openings of 2011 -- it's unlikely that the finale will eclipse (pardon the pun) some of its predecessors and set a new franchise record, as was expected going into the weekend. According to the handicappers at Deadline, the film will run neck-and-neck with the $138 million opening from Breaking Dawn Part 1, and a strong Sunday may push it past that film. Still, it seems unlikely at this point -- after a $71 million Friday that failed to set the franchise mark -- that it will go the extra mile and surpass New Moon's nearly $143 million opening. Of course, anything is possible. The rabid fanbase, a "twist" ending added to the film in order to create suspense for the readers of the novels could all add up with second viewings on Saturday night and Sunday, although it's unlikely. All told, the franchise has made more than $2.5 billion for Summit Entertainment, who were recently bought by Lionsgate. There's some speculation that, given the open-ended nature of the final film, Lionsgate may have more installments in mind. For her part, author Stephenie Meyer has said that while she may return to the setting of the vampires-and-werewolves series,  although per the author, the Cullen family saga is through. It's not immediately clear whether she retains the same kind of control over the source material that someone like J.K. Rowling did over Harry Potter, though, and so there's an outside chance that Lionsgate could choose to use the characters again anyway. There was some speculation that when Lionsgate announced a TV development deal including some of their valuable franchises like RED and The Expendables might also touch on Twilight. Meyer's first non-Twilight movie, an alien invasion film called The Host, will hit theaters in March of next year.