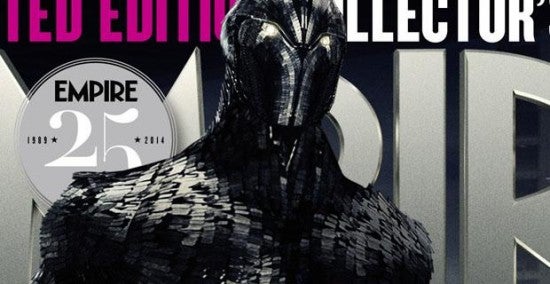 In comments made to Empire Magazine, X-Men: Days of Future Past designer John Mayre discussed the controversial "new-look" Sentinels of the future with the magazine that first debuted them in the early hours of this morning. In so doing, he offered an in-story explanation for the major alterations made to the robots' look between the comics and the film, as well as a peek inside the story in the form of an explanation of the Sentinels' abilities and what exactly makes them so formidable. "They're biomechanical weapons," Mayre told the magazine. "We had to come up with what would be the ultimate version that could actually, in principle, stop the X-Men. We started with this idea that they were almost made up of magnetic plates slapped over one another, imagining that the plates could contract or grow, so the Sentinel can be skinny to get through a small space or the plates can open up to become a bigger shape. So they have become virtually unstoppable." 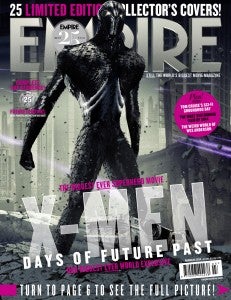 Biomechanical, hmm? And time-travel? Along with the callbacks to Jean Grey in The Wolverine, we almost wonder if we might see some version of Cable come out of all of this. A time-traveling child of Cyclops and a Jean Grey clone infected with a techno-organic virus that allows him to form X-Force in time for the team to get their own movie could very well connect the dots between what viewers know, what they expect and what's been rumored. Comic Book Movie also notes the design similarities to Nimrod, the super-sentinel first seen in the Days of Future Past comic book story (albeit with a much different color scheme). X-Men: Days of Future Past is due in theaters on May 23. Another trailer is expected this week to coincide with the massive entertainment-industry ad push of Super Bowl Sunday. The film reunites X-Men director Bryan Singer and his original cast, including Sir Ian McKellen, Halle Berry and Sir Patrick Stewart, with the cast of X-Men: First Class, including Michael Fassbender, Jennifer Lawrence and James McAvoy.

X-Men: Days of Future Past - More Details on the Sentinels of the Future