Last week, DC released a special 25th anniversary edition of Grant Morrison and Dave McKean’s haunting graphic novel, Arkham Asylum: A Serious House on Serious Earth. Ever since it was published, this comic has had a polarizing effect on Batman fans and general comic book readers. With its heavy reliance on obscure symbolism and psychological horror, there are just as many fans who deride Arkham Asylum as a pretentious mess, as there are those who praise it for its brilliance and literary qualities. Add in the fact that one of the most successfully superhero video games in industry history, Batman: Arkham Asylum, is loosely based off this graphic novel, and one can easily understand why DC has chosen to acknowledge the book’s silver anniversary with a new “deluxe edition.”

Meanwhile, if you’ve never had the opportunity to read Arkham Asylum, or if you’ve read it a bunch of times but are always excited to talk about it, here are five things about the graphic novel that make it worth celebrating 25 years later. 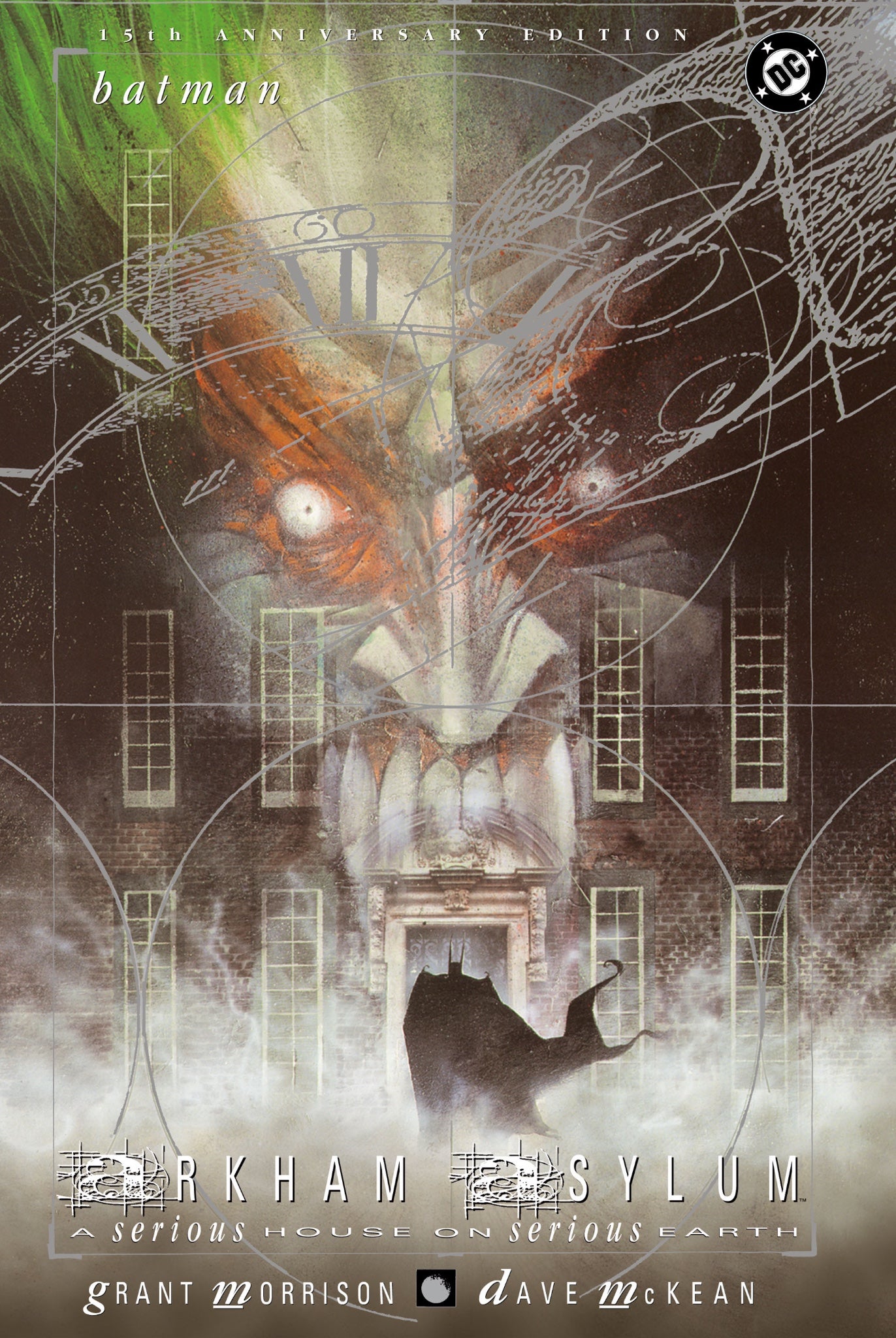 Like the graphic novel itself, author Grant Morrison is unquestionably a polarizing force for comic book fans and critics, with people either loving or loathing his dense, reference-heavy stories. However, regardless of what you think about Morrison, the man is unquestionably one of the most influential and recognizable comic book creators from the past 25 years, and his work on Arkham Asylum has a lot to do with that. Prior to Arkham Asylum, Morrison was best known for his work on Animal Man and Doom Patrol – two critically acclaimed series, but certainly not on the level of popularity of a character like Batman.

Then, in 1989, a little summer blockbuster was released that you might have heard of, Tim Burton’s Batman. Arkham Asylum was published as part of the wave of Batman content that followed the film, and was a commercial success upon its release, despite the fact that reportedly even DC’s editorial department wasn’t terribly supportive of Morrison’s work.

In the years that followed, Morrison cemented himself as one of Batman’s most iconic writers, scripting numerous arcs as part of miniseries and ongoings. He also went on to write other mainstream superhero books such as JLA, All-Star Superman and New X-Men. Without the success of Arkham Asylum, Morrison might have long been relegated as someone who’s sensibilities could only be applied to indie books. 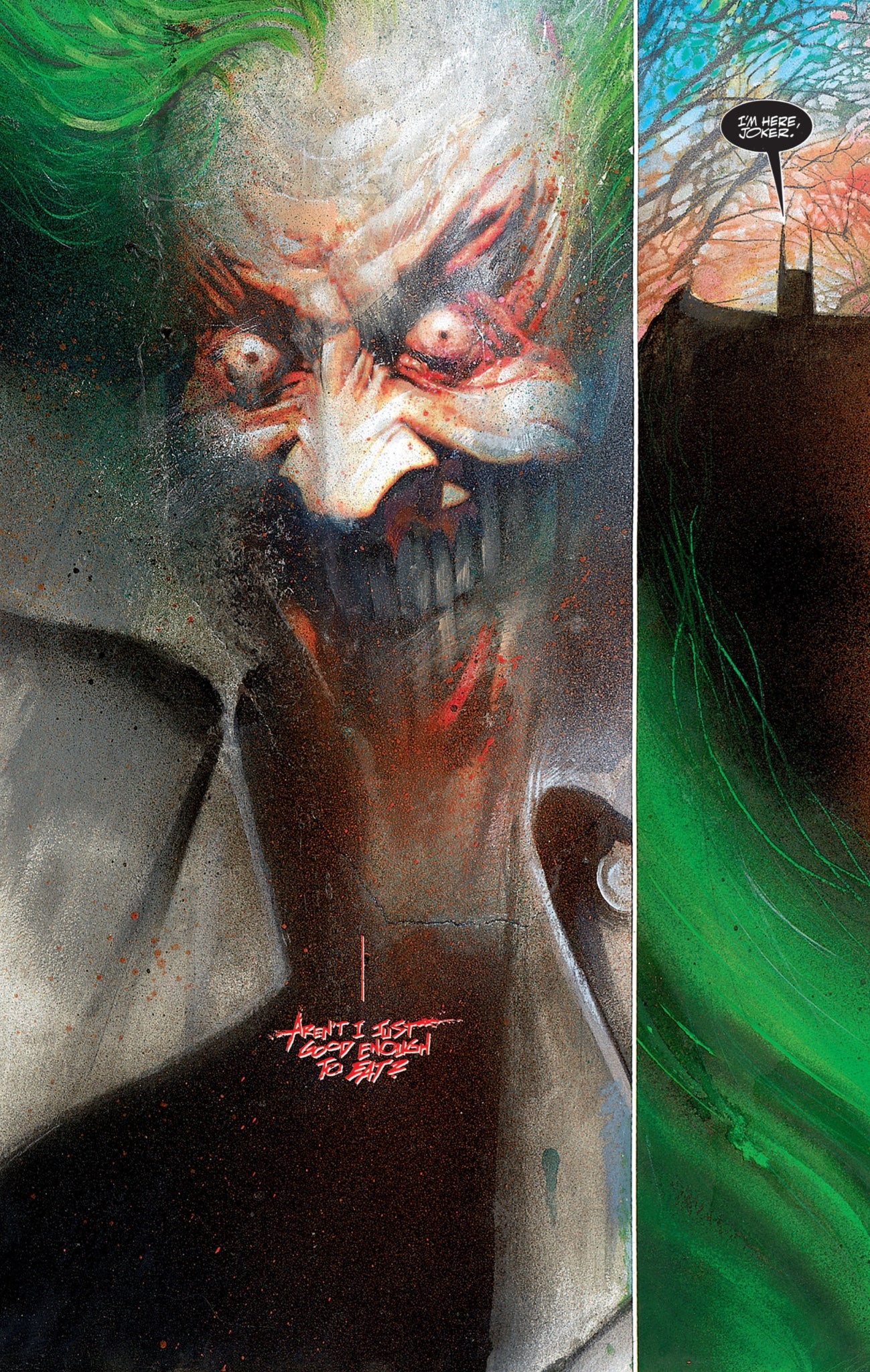 Calling a book that is steeped in Carl Jungian psychology “accessible” might sound like a total farce. But part of the beauty of Arkham Asylum is that the way it is written and illustrated, one doesn’t need to be a diehard fan of Batman mythology to derive a lot of enjoyment from it. In fact, the graphic novel takes place out of continuity. And while a number of Batman villains such as Joker, Two Face and Killer Croc show up throughout the story, it’s not like one has to have a working knowledge of their origins and backstories to grasp the general idea of them being the bad guys.

Because of its self-contained nature, a casual reader could pick up Arkham Asylum and absorb it for its use of imagery and symbolism, and how the creators attempt to psychologically break down a superhero. In fact, Morrison has said that upon the book’s release, it was initially more popular with non-comic book reader than long-term fans. It still may not be everybody’s cup of tea, but the same could be said for many other great works of literature.

Meanwhile, for hardcore Batman fans, there’s plenty to love about this graphic novel as well, as so much can be mined from it upon multiple readings that provide insights about the Caped Crusader. 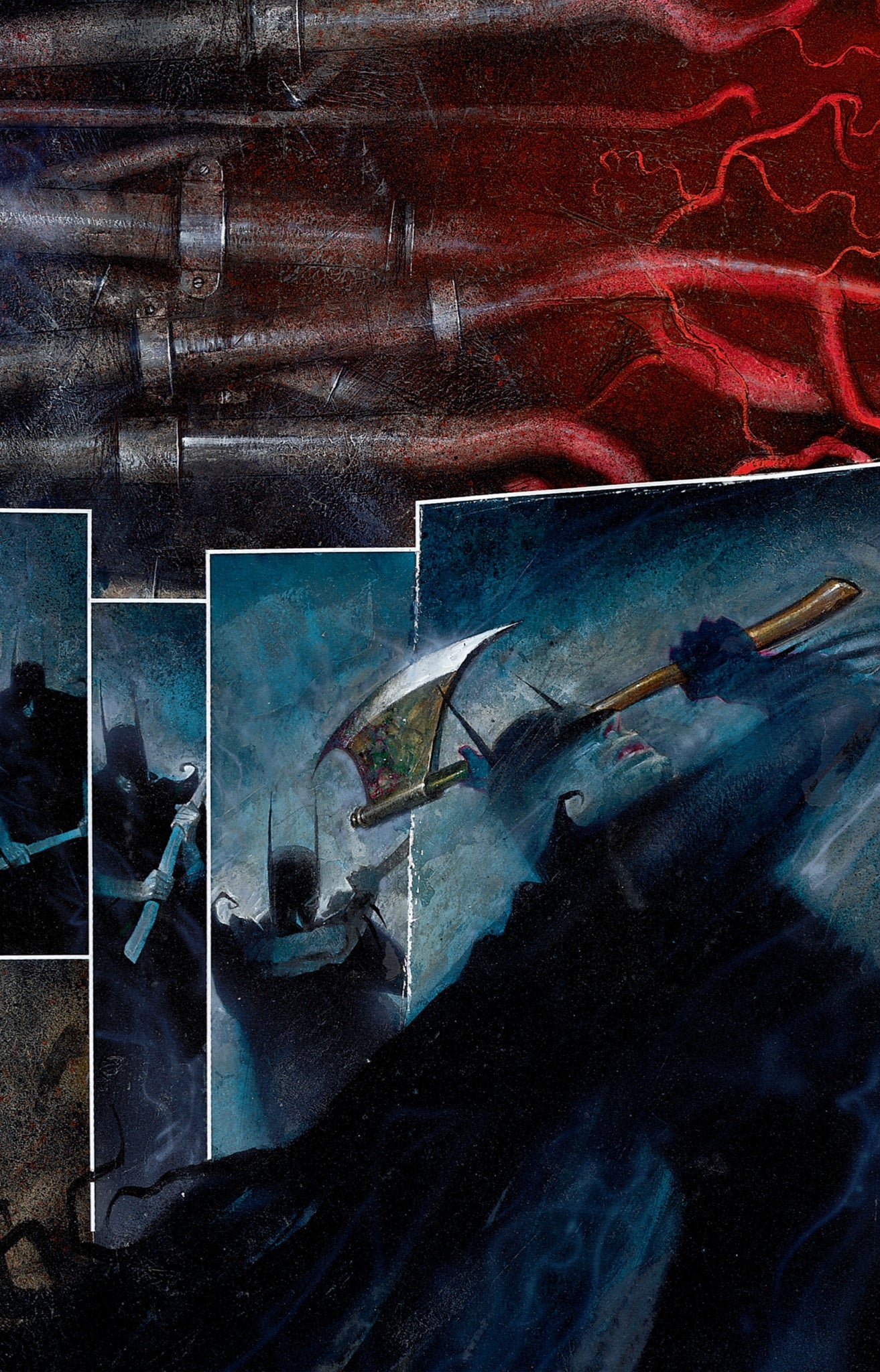 3. It Might Be the Best Breakdown of Batman Psychology in Comics

The mid-to-late 1980s were definitely a golden age of groundbreaking Batman stories, with such seminal works as Frank Miller’s Dark Knight Returns and “Batman: Year One,” and Alan Moore’s The Killing Joke. But despite the fact that all of these works played a pivotal role in shaping and impacting the Batman universe in a way that can still be felt today, Arkham Asylum is arguably the most insightful take on the character in terms of his psychology and emotional responses.

There are a number of interpretations as to what Batman actually experienced while confronting some of his worst enemies inside the asylum, with some critics suggesting that Batman left the facility with less sanity than when he entered, and others theorizing that Arkham Asylum itself is some kind of embodiment of Batman’s mind. Regardless of what you actually think, there are some themes and premises that Morrison puts forth that are still a part of the Batman mythos today, including this idea that Batman is most at home inside the confines of an mental asylum with the likes of the Joker and Harvey Dent, while living in the outside “rational” world is even more disconcerting and uncomfortable for the hero. In other words, the asylum is normal and the real world is Batman’s asylum. This concept is so powerful, that a number of creators, across multiple media, have attempted to explore it. But Morrison deserves credit for being the first to really pinpoint what makes Batman such a “freak” himself. 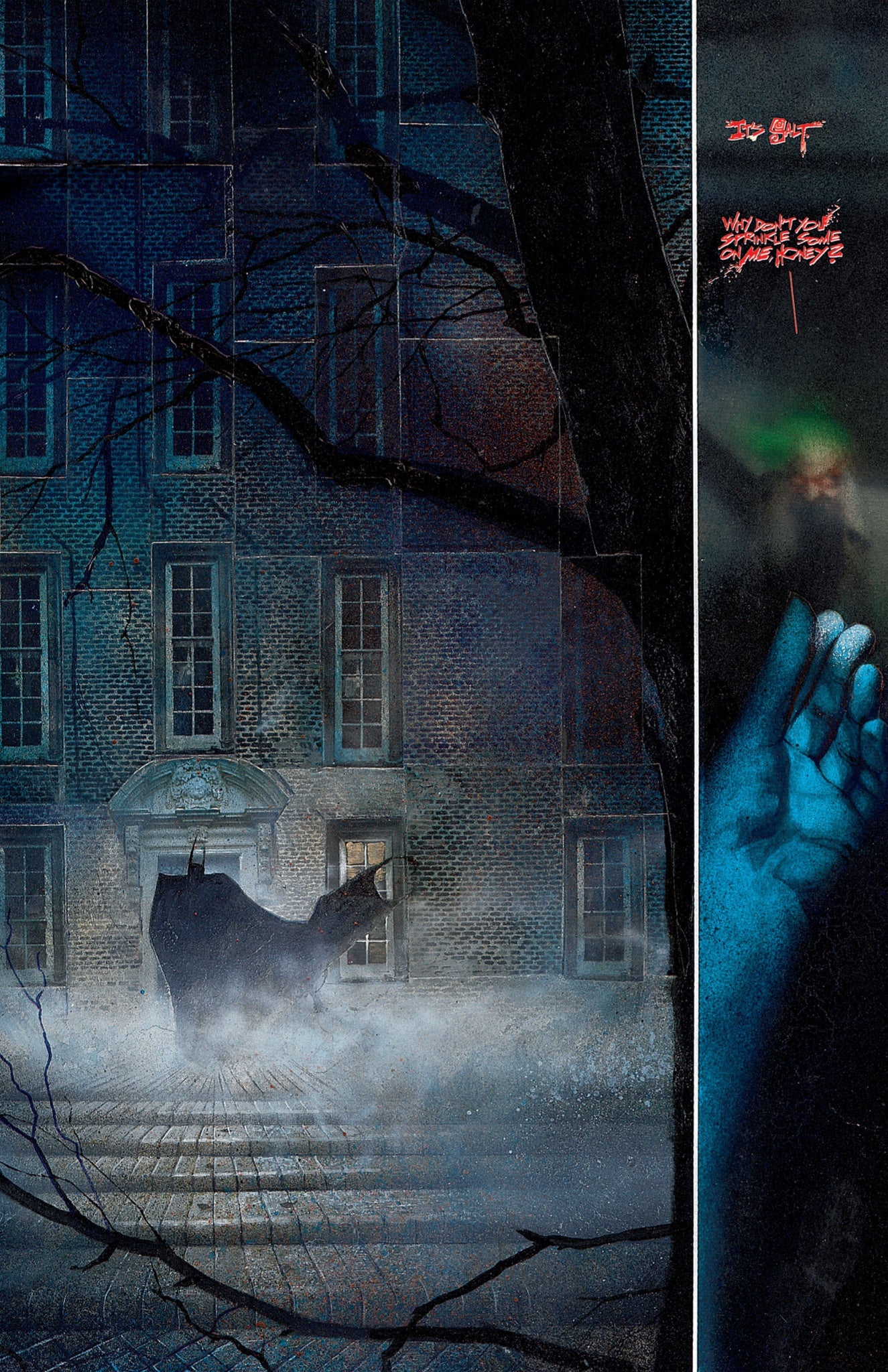 It’s not unheard of for a work of art to take an inanimate object like a city or a building and depict it as a prominent character in a story. By that, we mean, give this object a distinguished personality and defining traits that allows the setting to become as critical to the narrative as the actual action.

Before Arkham Asylum was published, the facility itself had been referenced a few times in Batman comics and an origin of sorts was written by Len Wein as part of the Who’s Who series. But after Morrison’s work, the words “Arkham Asylum” developed a totally new connotation. Thanks to Morrison’s storyline and McKean’s dark and psychologically unsettling artwork, Arkham embodied a true house of horrors and distortion, where even Batman appeared monstrous once he was inside. The fact that facility’s founder, Amadeus Arkham, is depicted as being locked inside of the building upon failure of transforming his creation into a sanctuary of healing, speaks even larger volumes for what the asylum is meant to represent.

Ultimately, while Batman is the most recognizeable character in this story, and the villains he fights are noted icons like the Joker and Two Face, every action and inaction flows through the character’s individual relationship to Arkham. Essentially, this is a story that can be told without the presence of Batman and his rogues, it’s just that Morrison and McKean use them as a device to tell a larger tale about the asylum. 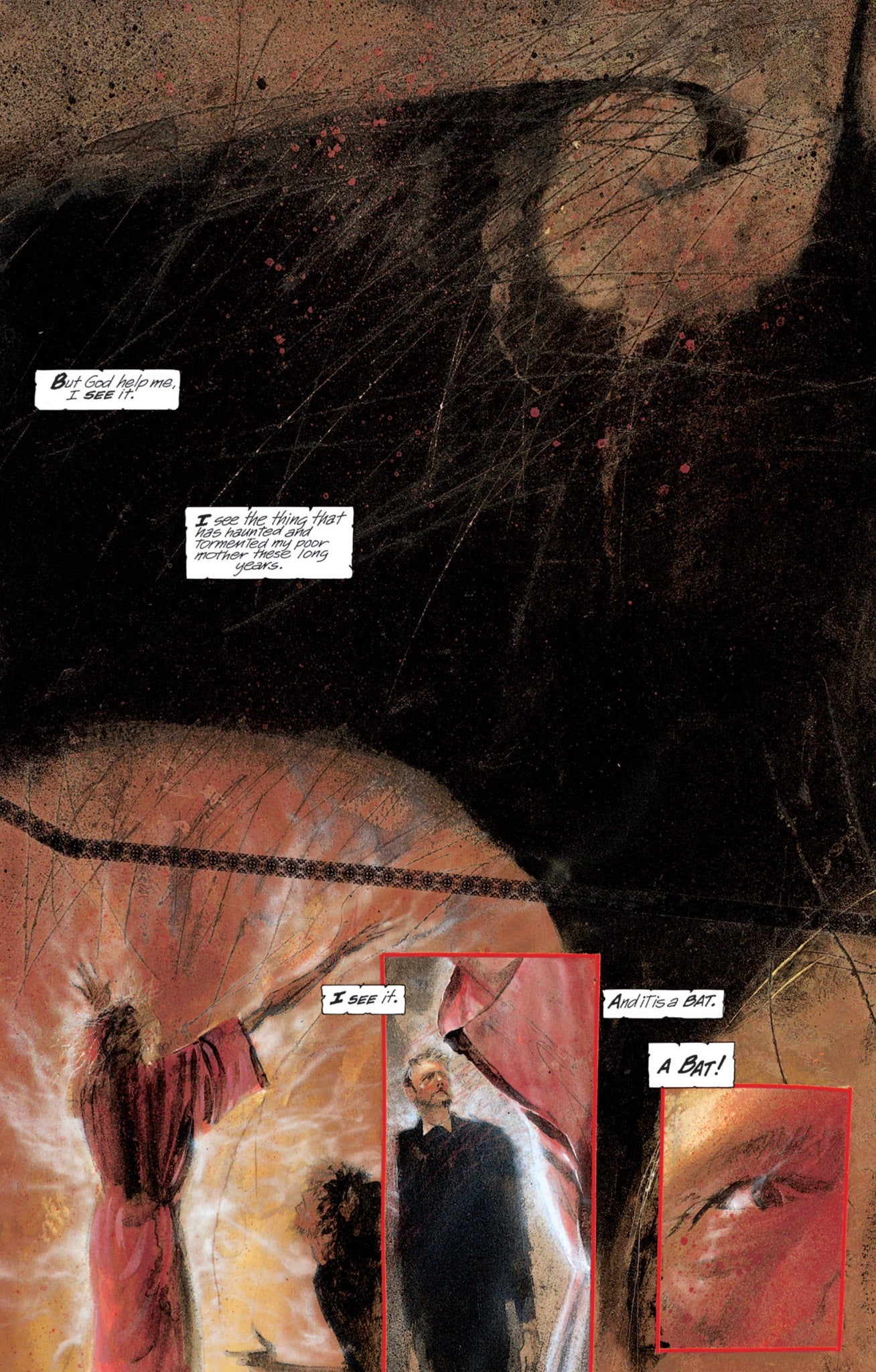 1. People Still Debate it All These Years Later

The ultimate testament of a book’s impact is the fact that even decades after it was first published, there is still plenty to talk about and debate in terms of its themes, narrative and quality. Perhaps DC released a 25th anniversary edition based on the popularity of all the Arkham Asylum video games (and thus try and generate some new sales from fans of the games). But anyone who’s read the graphic novel or just knows about comic books in general understands that as thoroughly as some critics have explored the contents of Arkham Asylum, there is always some crevice left to unwrap and discover. This is such a dense work of art that it requires multiple re-readings to be fully appreciated. As such, this is a book that’s impossible to just leave behind and forget after one viewing.