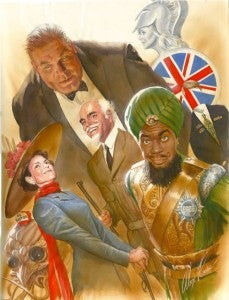 Courtesy the Tumblr of Monkeybrain Comics' Chris Roberson comes one of those images just too funny not to share. The cast of NBC's hit sitcom 30 Rock--about to enter its seventh and final season--are re-cast as the League of Extraordinary Gentlemen, Alan Moore's most successful new project of the last twenty or so years. Alec Baldwin, Tina Fey, Tracy Morgan and others can be seen at right dressed as Mr. Hyde, Mina Harker, Captain Nemo and more--but as you can see from the Invisible Kenneth Parcells, they retain some of the characteristics unique to their characters on 30 Rock. Well done, Alex Ross!

30 Rock: What Should The Cast Do Next?

New Like a Dragon: Ishin Trailer Revealed Before Release