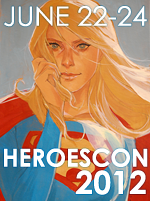 Back in 1982, who could have guessed that in 2012 HeroesCon, as it is known, would grow into one of the biggest comic book conventions in the southeast?  Well, that is a reality, and fortunately this year's thirtieth anniversary convention will be pulling out all the stops to make sure that this is one of the best ever! Taking place in Charlotte, North Carolina from June 22nd-24th, the event will feature tons of high profile guests, amazing panel discussions, and of course lots of comic books to see and indulge yourself in!  Take a look here at our preview of this year's mega event, which will feature some of THE biggest names in comics, then and now!

Guests:  This feature alone should draw your attention to the Tarheel State, as none other than Stan Lee is set to make an appearance for the three day event!  The man regarded as one of the most influential in all of comics will be on-hand to sign autographs, meet with fans and enjoy the atmosphere that the convention brings.  In addition, Lee will also be the focus of a one hour panel discussion beginning at 5PM on Saturday.  This is Lee's only panel of the weekend, so space is sure to be limited!  Joining Lee in attendance is Neal Adams, an artist and writer many credit with some of the more iconic images of Batman in the 1970s, and who is set to rejoin the X-Men later this year!  Adams will also be part of the panels, as well as running his own personal booth at HeroesCon.  Marv Wolfman and George Perez will be there as well, and they'll be kicking things off with a panel at noon on Friday about the history and development of the New Teen Titans!  History buffs should be sure to check this one out!

A host of other writers, artists, colorists and industry figures will be there as well, such as star writers Matt Fraction, Scott Snyder, Jonathan Hickman, Bill Willingham, Christos Gage, Laura Martin, Kathryn and Stuart Immonen, Jamal Igle, Ben Templesmith, Bernard Chang, and so many others!  For a complete list of the guests, click here.    Be sure to also check out Indie Island, an area of the convention reserved specifically for talent that may not be part of a mainstream company, self-published, or small press.  It's one of the best representations and spaces for independent work I've ever seen at a con!

Panels:  Those panels I mentioned earlier ARE awesome, but there are even more!  All three days will have panels going, all covering a variety of topics.  There are little to no repeat panels this coming weekend, so tough choices will have to be made!  There will be panels focusing on the art and work of a colorist, led by Laura Martin, starting your own comic, led by husband and wife team Comfort Love and Adam Withers, along with panels on Wonder Woman, the new DC 52, Iron Man, creator owned comics from Image, the teaching of comic books in schools, and many many others.  For the full schedule and list, look here!    Other panels of note will be on the upcoming First X-Men, Fables, BPRD, and a host of others!

Throughout the days, there will also be quick draw contests, where contestants will be given pencils and a surface and timed to see what their imaginations and pencils can create.  Cosplay will also be the focus of a two-part panel at HeroesCon, with all the how-tos and wherefores answered in this informative session.  SCAD, the Savannah College of Art and Design, will once again be attending to lead a workshop this time on inking and the art and craft behind it, as well as one on cartooning.  There's plenty for everyone at these panels, but be sure to show up early, as some of these will reach capacity very quickly!

Retailers!  I think it goes without saying that one of the biggest and best things about HeroesCon has always been its selection of retailers, and this year the list of retailers tallies at well over 100!  Comic book vendors, t-shirt, novelty and collectible salespeople and businesses from as far away as the west coast will be in attendance, so the selection of comics and treasures is plentiful!  Be prepared to be dazzled and amazed.  This is one of the biggest gatherings of comic book retailers in the south, so be sure to take advantage of the deals all weekend long. If you're looking to trade or sell your own collections, have no fear, as there are always retailers here looking to do business with you!

HereosCon is truly special, and with the thirtieth anniversary of the convention this year, you won't want to miss it!  The convention is hosted by Charlotte, North Carolina based comic book retailer Heroes Aren't Hard to Find.  For more on the event itself and details about hotels and the Charlotte Convention Center, where the convention will be held, check out the official page for the convention.

30th Annual HeroesCon Set to Kick Off This Weekend!