Two of Marvel's most famous characters, Wanda and Pietro Maximoff, better known as Scarlet Witch and Quicksilver, recently had their comic book biography drastically altered when it was revealed in an issue of Avengers & X-Men: Axis that they were not actually the children of Magneto. This retcon undoes more than 30 years worth of storylines, though the long and winding dramatic saga of Wanda and Pietro actually dates all the way back to the mid-1960s, when both characters were introduced as part of Magneto's Brotherhood of Evil Mutants.

This list marks some of the key moments in Scarlet Witch/Quicksilver history – the essential storylines that have helped shape them as icons in the Marvel Universe. Where Avengers and X-Men: Axis ultimately ranks in this list remains to be seen, though the miniseries will clearly have a contextual impact on many of the stories featured here. 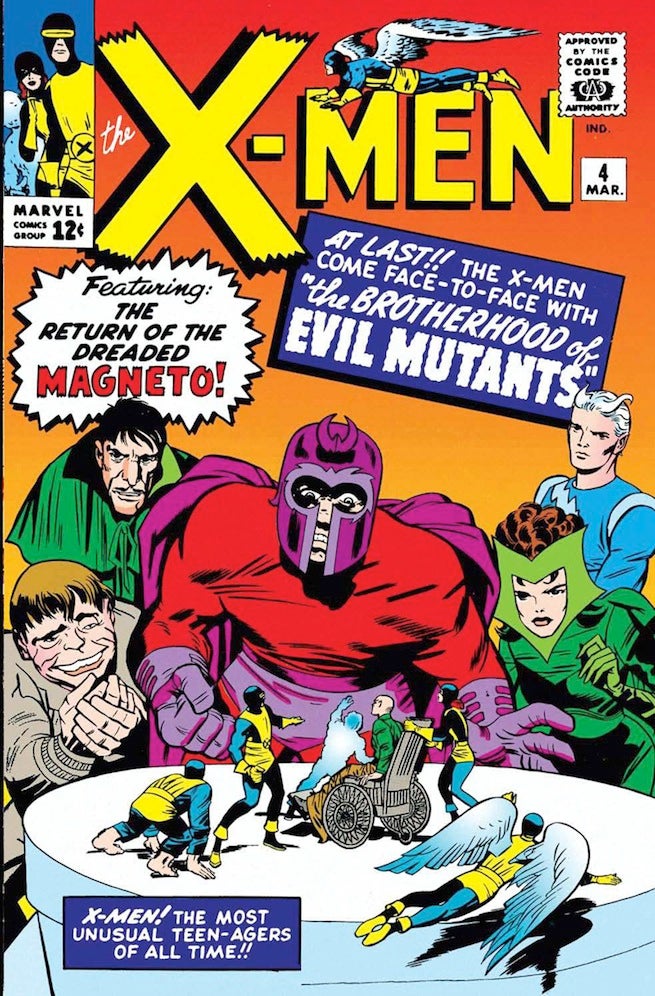 This is the Stan Lee/Jack Kirby classic that marks the very first appearance of Quicksilver and Scarlet Witch. Before there was even the slightest inkling that these super-powered twins had any familial relation to Magneto, they appeared in the first iteration of the Brotherhood of Evil Mutants,  a stable the "Master of Magnetism" put together to strike fear in the hearts of homosapiens everywhere.

However, there was something noticeably different about Wanda and Pietro right from their Marvel Universe debut. Both join Magneto's brotherhood because they have no other options, voicing displeasure and disagreement with his militant ideology. Proving that these two weren't actually evil, Quicksilver disables a bomb designed to kill the X-Men before it can blow. The fact that these two clearly lacked a mean streak would come into play only a short while later… 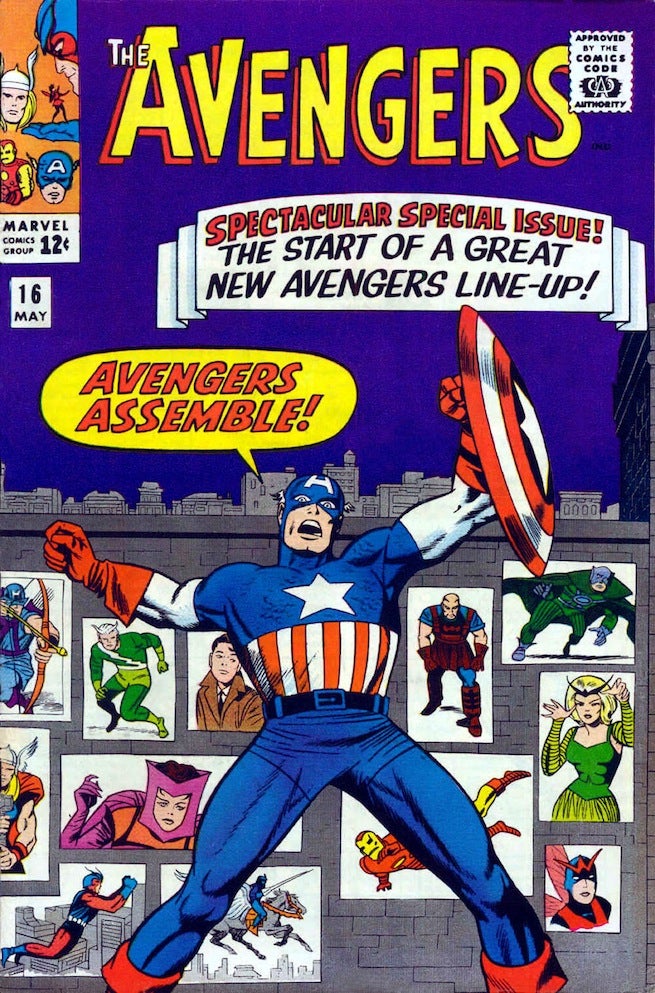 In this pivotal Silver Age Avengers comic, Iron Man, Thor, Hank Pym and the Wasp all decide that they need a break from avenging and the most responsible way to go about doing that is to line up a new batch of heroes to defend the Earth from its greatest threats. Clint Barton, aka, Hawkeye, a former thief and burglar who is really an archer with a heart of gold, is the first new Avenger to make the cut. Then Wanda and Pietro make their case to join (via snail mail 'natch) and are invited to round up the new batch of Avengers dubbed "Cap's Kooky Quartet."

The old guard of Avengers are initially skeptical of Scarlet Witch/Quicksilver and their prior allegiances with a somewhat evil mutant, but once they learn that the twins left their former mentor Magneto the duo is deemed worthy of becoming Avengers.

For their first mission, the quarter is tasked with retrieving the former Avenger, Hulk. Good luck with that. 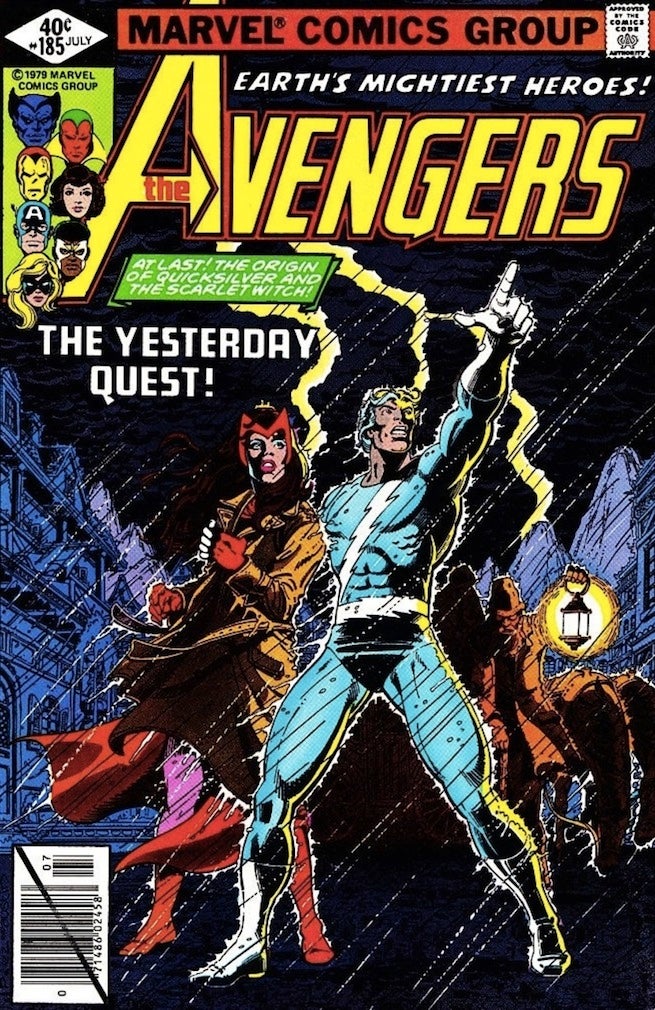 This late 70s classic Avengers tale, which was co-scripted by David Michelinie, Marke Greunwald and Steven Grant, is the first attempt to explain Wanda and Pietro's mysterious origins (which, of course, have now been retconned thanks to Avengers & X-Men: Axis). Magneto is never mentioned by name, though through the power of hindsight, there are definitely some legitimate hints that a character with prominence and clout in the Marvel Universe had fathered Quicksilver and Scarlet Witch.

Instead, the arc is just your standard issue origin story featuring bovine midwives and immensely powerful twins given to somebody else after their mother dies in labor. What's that, you never heard of a midwife that is a giant, talking cow? Just go with it. The High Evolutionary was involved.

"The Witch of Wundagore" is also notable for introducing another famous Maxmioff Twin trope – Scarlet Witch losing control of her facilities and powers and turning evil. This time around, she is possessed by a demonic sprit, Ch'thon (pronounced … I really don't know). 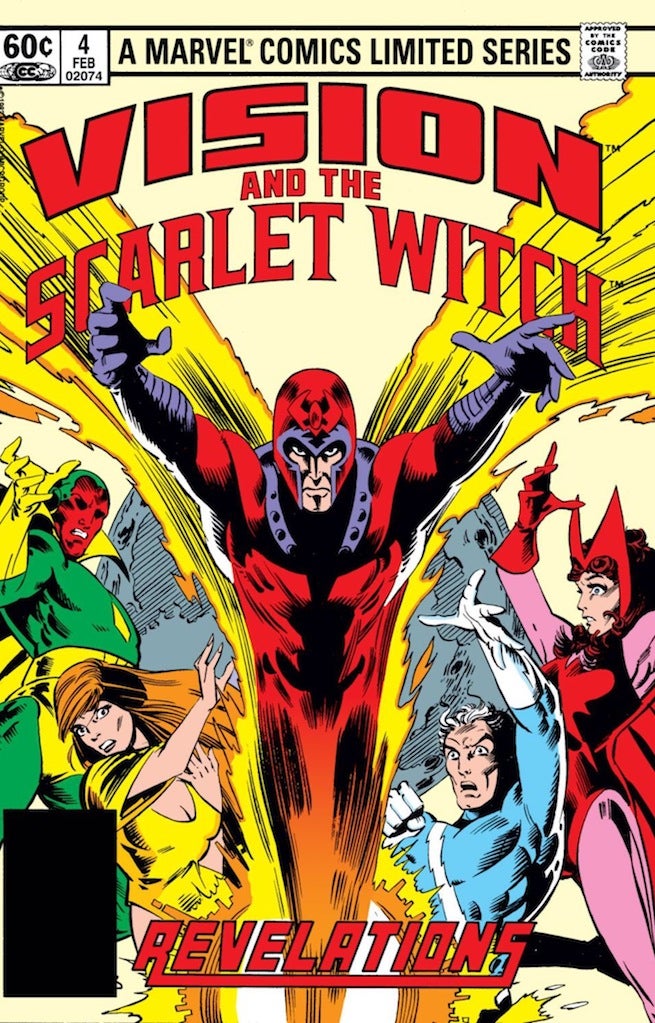 The comic that went on to change the direction of the Maximoff twins for more than 30 years, this final installment of the Bill Mantlo/Rick Leonardi Vision and Scarlet Witch miniseries, drops a bombshell on Wanda and Pietro's lives when Magneto steps forward as their father. Building off "The Witch of Wundagore," this comic details how Magneto was the ultra-powerful bad guy that Bova, the bovine midwife, was hiding his children from out of fear  of what he might do with the twins upon learning of their existence.

Of course, at this point in Marvel Comics history, Magneto was transitioning from one of its most heinous characters, into a somewhat sympathetic anti-hero. Even the title of this comic, "Please Allow Me to Introduce Myself," was a play on the aptly-title Rolling Stone classic, "Sympathy for the Devil." In one of the comic's most stirring scenes, Magneto tells his shocked children that he will never ask the world at large to understand or sympathize with him, but he will ask that of his children. 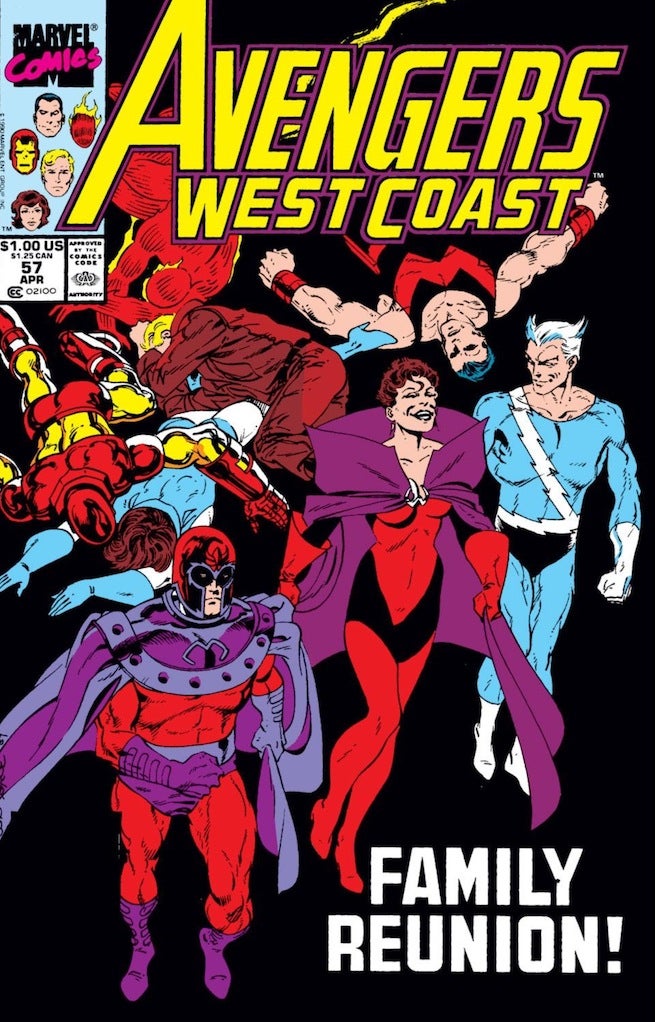 The second (of many) "Scarlet Witch has gone crackers" storylines in Avengers history (this one complete with with a new haircut and costume). This time around, Wanda is possessed by the all-powerful Immortus, a time-traveling descendant of Kang's that seeks out the Scarlet Witch to serve as his queen over the dominion of time.

Before Immortus is revealed as the mastermind of Wanda's character turn, it initially appears that Magneto is somehow manipulating his children for evil purposes. But the Maximoff family reunion is short-lived, as Quicksilver is really only pretending to agree with Magneto to keep an eye on his sister, and Magneto is revealed to be just a helpless pawn in the Immortus's larger, reality-bending scheme. The story is also notable for being scripted, in part, by John Byrne, before he left the book in an editorial dispute, which explains why it was released in piecemeal fashion. 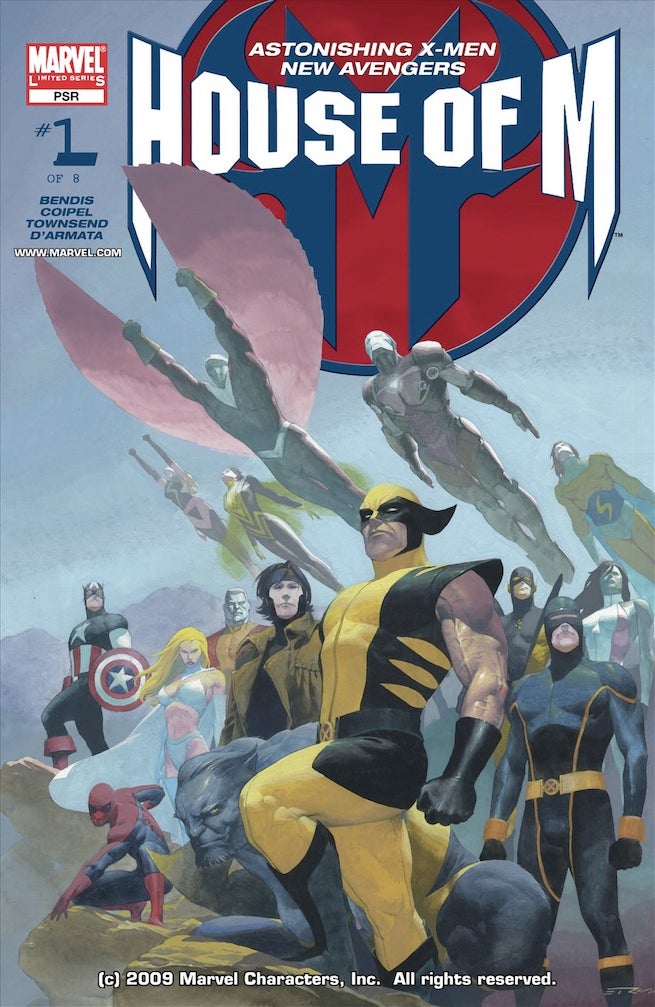 The "big one" in terms of the Maximoff family drama, fresh off of using her reality altering powers to indirectly kill three of her Avengers teammates, Hawkeye, Scott Lang and her ex-husband, Vision (effectively "disassembling" the Avengers), Wanda creates another new reality. And this one has some pretty far-reaching consequences. House of M, which was written by Brian Michael Bendis with pencils from Olivier Coipiel is the definition of a game-changing event comic. In this story, Wanda, who is still feeling the pain of her lost children, creates an alternative reality where heroes have their hidden desires and wishes met. It might sound good on the surface, but once the heroes start to come to the realization that this whole universe is a sham, they are justifiably ticked off with the way their lives were messed around with.

But Wanda's story is the most complex of all in House of M. Because she doesn't realize that she was responsible for making this world, she is profoundly devastated when she learns the truth. What follows next is the event known as "M-Day." Wanda says the words "no more mutants," de-powering more than a million mutants from around the world, including her brother and father. 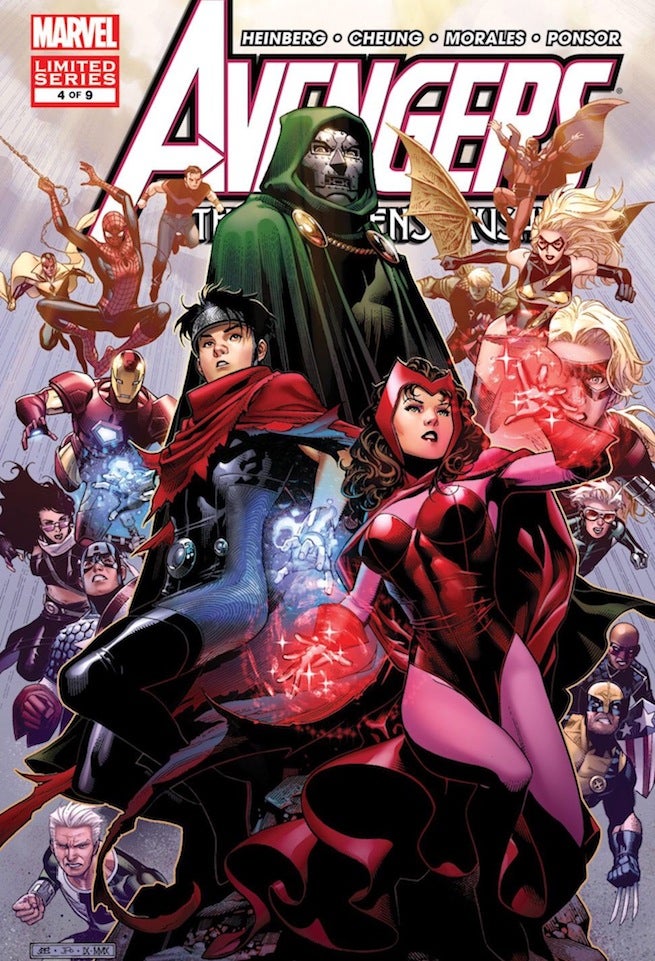 The nine-part miniseries that marks the first step in the long rehabilitation process of Wanda Maximoff after the tragic events of "Avengers Disassembled" and House of M. In this event, the Young Avengers, most notably Wiccan, who, along with his twin brother Speed, believes himself to be Wanda's thought-to-be-dead children, sets out to try and find his presumed mother. Thinking that these children should get to know their grandfather, Magneto accompanies them on the first part of the journey, which in turn spurs a surprising series of events that attempt to explain and justify Wanda's reprehensible actions.

The story reveals that in the events leading up to "Avengers Disassembled," Wanda may not have been acting of her own free will. When Wiccan finds her, she is engaged to be married to Victor Von Doom. She's been de-powered and is an amnesiac. However, her memories start to come back to her and she learns that her powers essentially overloaded when she works with Doom to try and resurrect her children via the Life Force. As the story chugs along, Doom is unveiled as a less-than-sympathetic figure, while both the Avengers and the X-Men are each trying to track down Wanda for her perceived crimes against them.