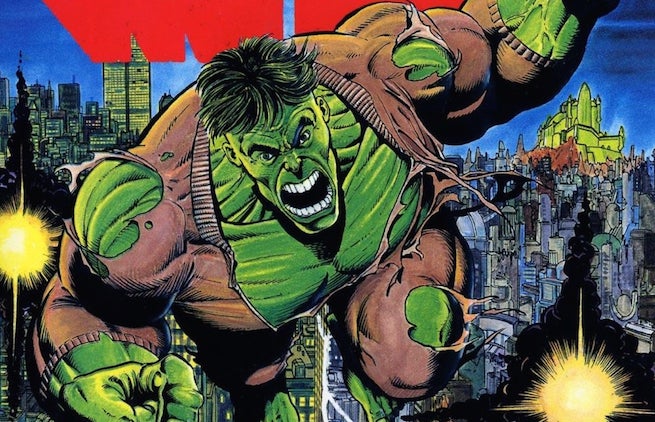 It's time to go back to an imperfect future in this installment of "90s Nirvana," a recurring list feature that examines, celebrates, and critiques famous storylines and single issues from the 1990s.

Peter David and George Perez's The Incredible Hulk: Future Imperfect storyline is back on our minds once again, thanks to recent issues of Spider-Man 2099 (also written by David), and the news that the alternate future will crash onto Battleworld for Marvel's "Secret Wars" crossover event.

Set in a dystopian tomorrow a la X-Men's "Days of Future Past" (in a realm called--wait for it--Dystopia no less), Future Imperfect pits the Hulk against his alternative future self, the Maestro. The super hero-turned-villain, who combined Bruce Banner's intelligence and the Hulk's malicious instincts to deadly effect, was first created by David in the midst of his landmark run on The Incredible Hulk, which lasted more than 100 issues.

So is Future Imperfect a masterclass in story, character and art, or is it as imperfect as the alternate future itself? 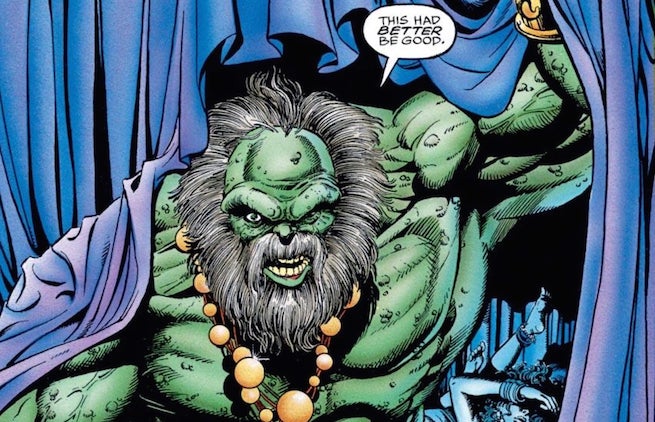 As a general rule, the Hulk is a nigh-indestructible monster whose hands are his greatest weapon. David took this rule to heart when he created the Hulk's future iteration, Maestro. Maestro embodies everything a reader should want in a supervillain – immense power, cunning intellect, and that one Achille's heel for the hero to eventually exploit. The Maestro isn't just one step ahead of the present-day Hulk, but miles beyond.  That domination adds a real sense of drama and doubt to the outcome of the story. 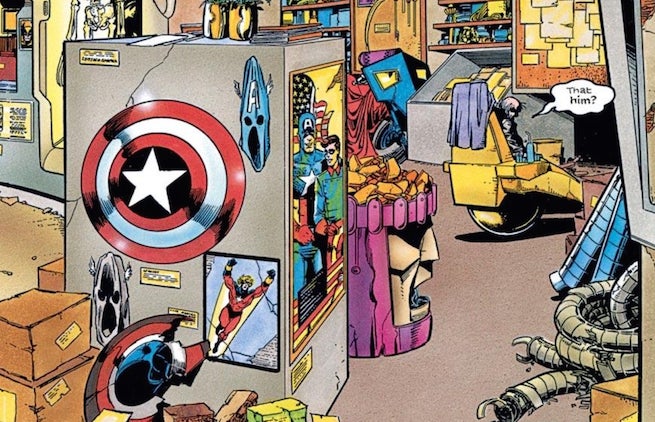 2. A Sense of History

While Future Imperfect is set in the future, many of its key plot points are inextricably linked to the past. The real sense of scope an grandeur is found in the Maestro's trophy room, where the villain amasses a collection of the Marvel heroes' costumes and weaponry. And like most Chekovian guns, these items come into play during the storyline's final battle.

The storyline also uses Hulk/Bruce Banner's old buddy Rick Jones to great effect. The traditionally young and hip Rick is depicted as an old man trying to help his friend defeat the Maestro, while also pushing Hulk to remedy the personality flaws personality flaws that led to his transformation into Maestro. 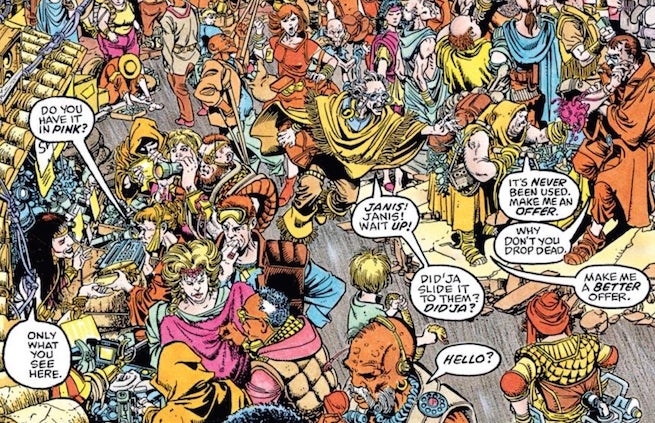 Thanks to David and Perez, Future Imperfect seamlessly transitions from Dystopia's city streetscapes to the interior of the Maestro's compound. Dystopia reflects the twisted psyche of its owner by being concurrently futuristic and archaic. The city is filled with ruins and rubble, while giant robotic attack dogs, capable of crushing adamantium with their jaws, roam the streets. Inside, the Maestro's is aesthetically akin to the set of a great Greek tragedy. His guards and handlers wear flowing robes, but carry laser blasters and other futuristic weapons. The clash in styles is disorienting in a terrific way, providing a real sense of aura of terror throughout the story. 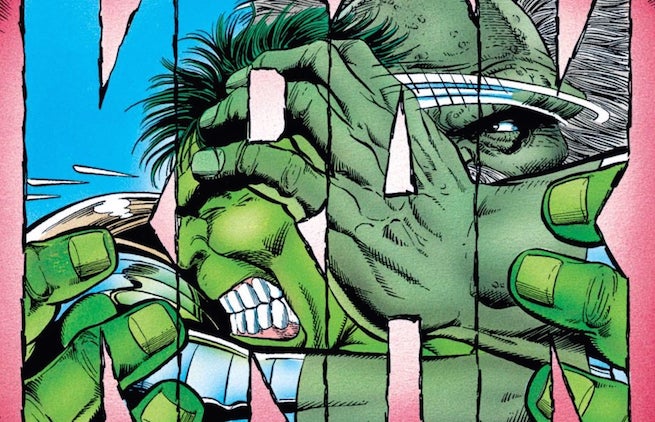 Oh George Perez, the titan of artistry. It's always refreshing to crack open an action-heavy comic book like Future Imperfect and find artwork that's visually dynamic and understated. In a Perez comic, one never has to worry about bizarre anatomy, ridiculous weapons or pouches with inner pouches. Future Imperfect features only one oversized weapon, but it actually reads as a bit of meta-commentary from David regarding the bombast and excesses the 90s are known for. The Forge-designed gun was created explicitly to kill Maestro but failed to deliver, demonstrating that the size of a weapon could be rendered moot in the face of a classic villain like David's Maestro. 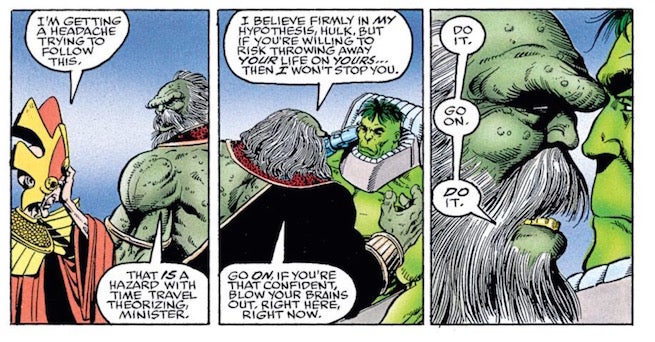 At one point in Future Imperfect, the characters essentially break the fourth wall by noting how the book's presentation of time travel and the Multiverse is a bit confusing. The Maestro is originally introduced as the Hulk from the future, but once present-day Hulk threatens to kill himself as a means to defeat the villain, the Maestro boasts of some kind of time travel paradox that would render such consequences meaningless. Still with us? Then, Hulk retorts that maybe Maestro is trying to trick him because he's from the future and knows that Hulk might try to kill himself and--well, just writing this makes me want to curl into a fetal position and suck my thumb.

For brevity's and/or sanity's sake, let's just say Future Imperfect is set on a parallel world/timeline where the Hulk, in the future, becomes a malicious, world conquering supervillain. David's script eventually arrives at this point, but it's a seesawing journey getting there. 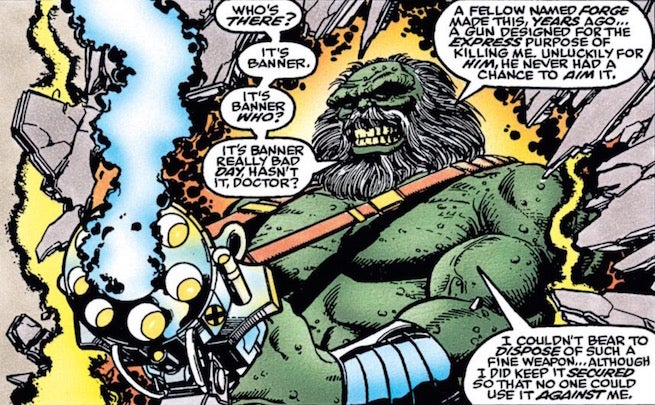 David might have a reputation for being one of the industry's funniest writers, but even the best stand-up comedians lay a few eggs from time to time. Future Imperfect is really at its best when it's light on the humor and sticks to the action. In the few instances where the book does go for traditional one-liners, it results is some real groan-worthy jokes like this ill-conceived "knock knock" joke.

Things That Make You Go Hmmm…

1. Flark You Very Much

David must love coming up with new future timeline expletives. A few months before Future Imperfect was published, David was the co-creator of Spider-Man 2099. In that future,  the word "shock" is the timeline's four letter swear-word of choice. But for Future Imperfect, "flark" seems to be the vogue "F" word. 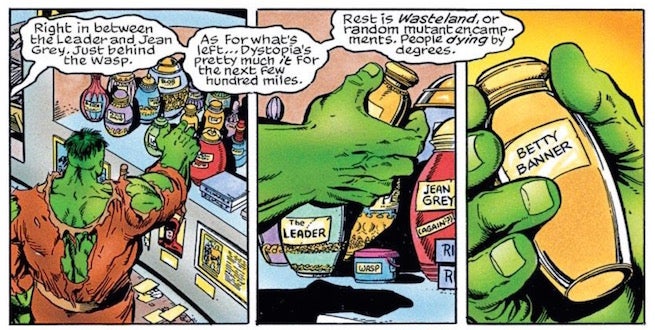 Among the many artifacts in Maestro's trophy room are urns containing the ashes of various heroes. David and Perez have a lot of fun with this. On Jean Grey's urn, under her name is the word "again?" (if they only knew how true that would be). And if you look extra hard, David even included his own ashes in the room.

Future Imperfect is an underrated classic completely deserving of its modern-day revisit.  David and Perez created a dynamically terrifying new universe filled with memorable characters like Maestro. As Battleworld brings this sinister world into Secret Wars in May, we can't wait to see how it will clash with Marvel's other dark realities.