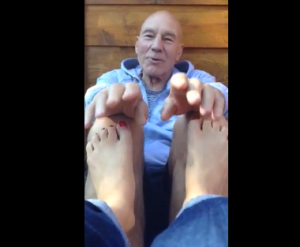 Outside of being the best Captain in the Star Trek TV franchise (sorry Kirk fans, it's a fact), Patrick Stewart also is by far the best actor to portray a Captain in all of the series. He's been nominated for multiple Golden Globes, Tony Awards, Screen Actor's Guild Awards and won an Emmy for his portrayal of Ahab in Moby Dick. He also has portrayed Professor Charles Xavier making him one of the biggest stars working in science fiction. But for those who look for him on social media sites like reddit know that it is there that he really shines. Whether it be him sleeping with a cat or just simply ACTING he's pretty amazing. This video of him teaching his girlfriend (according to reddit) the elusive 'quadruple take' is among the best of Sir Patrick Stewarts non-paid-acting appearances. Enjoy.