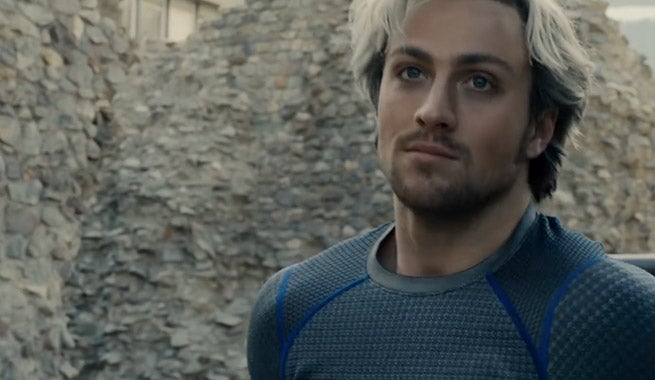 Warning: The below post contains massive spoilers for Avengers: Age of Ultron.

As fans who saw Avengers: Age of Ultron know, newcomer Quicksilver left the Marvel Universe almost as quickly as he entered it by sacrificing his life for fellow Avenger Hawkeye. It was easily one of the film's biggest moments, surprising even the most informed viewer.

But surely, a move as significant as that didn't come without some internal discussions first. And as a recent interview with Quicksilver actor Aaron Taylor-Johnson revealed, Marvel Studios gave Pietro Maximoff's fate a fair amount of thought. In fact, the studio went so far as to make designs for future Quicksilver costumes just in case he survived the film and achieved full Avengers status.

As he told CinemaBlend:

"It's [the] Marvel universe. It was very much our intention to kind of go the way we did. There was a costume designed for whether… if I didn't [die]. Which was ****ing really cool. I was like, 'Oh my God.'

I'm not sure if I really can really go down that realm, but you know, yeah, it was definitely an alternative, that I think they had to play with. But, it was very much set from the very beginning, and Joss had in mind to tell the story that he told… and I was very game for that, as well, because I think it really gives [the movie] sort of an emotional twist to it. A surprise."

It's interesting noting Johnson's first sentence. When he says "It's the Marvel Universe," is he referring to the fact that no one there truly stays dead? Phil Coulson, Nick Fury, and even Loki have either cheated or faked their deaths, so there's no saying Quicksilver isn't following suit.

But what say you, readers? Were you shocked by Quicksilver's death? Would you like to see him stage a resurrection? Sound off in the comments below.