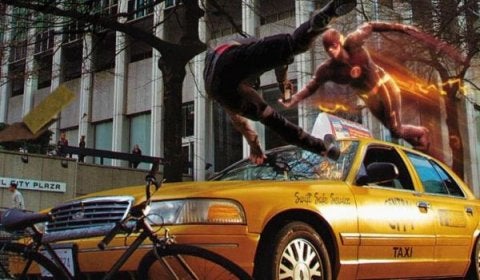 Scientists are ruining the fun again, as CinemaBlend have tracked down a study that points out the problems with the way The Flash uses his powers, saying that he'd be likely to do more harm than good.

The study comes from a group of physics students from the University of Leicester, who use the famous scene from the CW pilot for The Flash in which Barry saves a cyclist from an oncoming car. The speed at which Barry was traveling, they reason, would actually cause much more damage than the car could have.

Of course -- as CinemaBlend states -- Barry's powers can help to compensate for the potential for damage in ways that science can't account for since the powers operate in a fictional universe and have physics of their own.

Not only is the Speed Force a factor -- I'm pretty sure that during Mark Waid's long run on the post-Crisis on Infinite Earths version of The Flash he dealt with this very issue -- but so are other abilities he has, such as the ability to lend or borrow velocity to people or objects, and to vibrate through objects, and/or at a speed that makes him in- or semi-tangible.

Nevertheless, for math and science types, it could be fun to check out the study and chime in at the bottom to let us know what you think.

According To Physics Study, The Flash Could Do More Harm Than Good With His Rescues