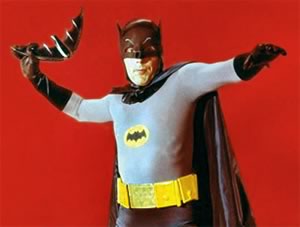 In a very clear case of putting the cart before the horse, Adam West, beloved by fans as Batman in the 1960's camp classic TV series, has begun producing a two-disc DVD set of his commentary, episode by episode, on the series Batman, which has been stuck in DVD release hell for many years now. Adam West Naked is available on West's personal website for a reasonable $30 and features the actor giving his take and never before heard stories about the goings on with the filming of the series. Perhaps adding an even more intriguing twist to the production is the manner in which he presents his information. According to the product description, viewers can expect to see West talking to them perhaps in his attic, or astride an imaginary horse in his own home. While certainly an inventive method of presentation, West's personal stories will be rich with information and facts that fans of the series may not have heard before! So while Warner Bros. and Fox contend and straighten out the red tape involved in bringing the series to DVD, enjoy hearing the details from the show, straight from the bat's mouth!