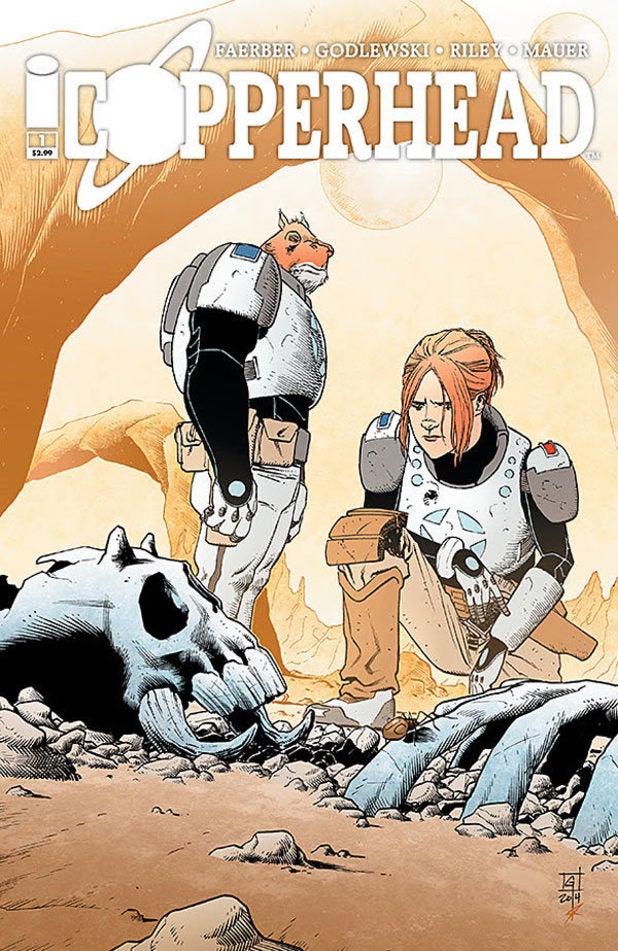 I've been thinking a lot about creating a sense of place recently. What does it take to immerse a reader in a fictional universe? How do creators naturally imbue a sense of history within the context of a story? When done well, it can help to create a tale that inspires imaginations and makes its audience want to continue exploring. Reading Copperhead #1 I was struck by the rich mythos that seemed to be lurking just outside of every panel. It is a comic that occurs in a fully formed place.

Although it is set in a small mining town on a desert planet, Jay Faerber and Scott Godlewski build a culture, a world, and an entire universe around it. Every panel acts like a carefully selected window. The opening sequence takes place on board of a mag-lev train. Only a single compartment is shown, but there is a feeling that if the window were to be shifted to the next car, then another story would emerge.

Godlewski and colorist Ron Riley craft the initial sense of place. Buildings and vehicles are all designed to be unique to this setting. Although some panels set in Copperhead may feature familiar elements, they are always at least slightly different. Everything about the town feels lived in too. From exterior walls to office settings, dirt and damage are apparent. Copperhead is a town with history scarred onto its surface. Riley applies burnt oranges and dusty yellows to make this planet feel truly desolate. There is life here, but the terrain never appears to be anything less than harsh and uncaring.

Faerber helps to construct a wider world around this desolate locale through his narration. References to technology (mag-lev trains), history (a recent war), and race relations (between humans and aliens) are peppered throughout the dialogue. These allusions to a wider world could easily be written in a hackneyed manner if forced. Faerber allows the flavor to seep into conversation naturally though. This intuitive cadence left me wanting to know more about small hints of conflict and history.

Part of this richness comes from being set in a potent blend of genres. Copperhead will be compared to Firefly for being a mash up of science fiction and Western tropes. That combination has existed for a long time though, ranging from the original Star Trek series to modern concepts like Cowboy Bebop. It's a fusion of two genres that both rely on the concept of the unexplored frontier, a place where explorers must constantly confront new challenges and the unknown. This combination allows for a world with both a rich history and plenty of mysteries to uncover. Copperhead will receive plenty of comparisons, but everything in its first issue is a genuinely original exploration of these two genres.

Copperhead lacks some of that depth in its introductions to the cast though. Clara, Copperhead's new sheriff, and her son Zeke arrive in town, but their background is left a mystery. I understand how Clara and Zeke behave and can extrapolate a sense of who they are, but why they are here and what they want is unknown. That mystery is purposeful though. There is clearly plenty to Clara and Zeke's characters, but they are engaged in the action of the moment for most of this issue. There is an interesting twist on what initially appears to be a clichéd dynamic. The odd couple cop set up is altered in one sequence so that what initially appears to be simple rivalry becomes chilling indifference.

Copperhead #1 opens a window to a desolate planet that is rich with history and ideas. There is a lot occurring in the background and details of this comic. It's a story I only expect to grow and improve as it delves further into the world created by Faerber and Godlewski.

ADVANCE REVIEW: Copperhead #1 - "A Window to a Desolate Planet Rich with History and Ideas"