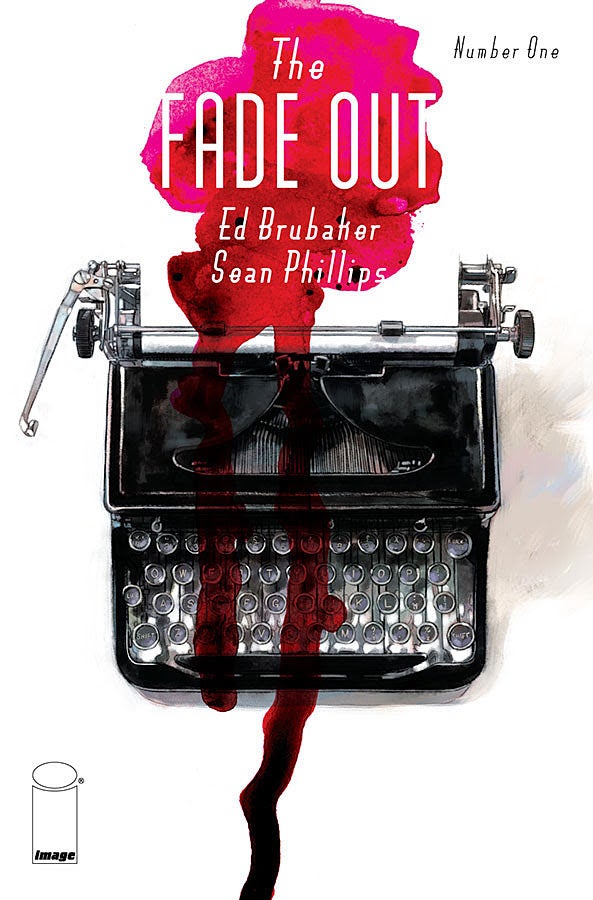 Ed Brubaker and Sean Phillips will go down as one of the classic teams in comics' canon. Like Jack Kirby and Stan Lee, Frank Miller and David Mazzucchelli, Garth Ennis and Steve Dillon, whenever they combine their talents the result is stunning. First working together in 2000 on Scene of the Crime (which Phillips inked), they have produced a wide array of works together over the past fifteen years. Sleeper, Criminal, Fatale, and others; each a success acclaimed by peers, critics, and fans.

Needless to say, their most recent work The Fade Out #1 is a massive success.

If there is a connecting thesis to Brubaker and Phillip's work, it's the creation of a noir movement in modern comics. Their collaborations tend to feature first-person narration, complicated storylines, dark mysteries, and flawed protagonists. Although elements of the superhero and horror genres have crept into some of their works, every one holds a connection to the film noir principles born in the 1930's.

Although their stories bear strong influences, Brubaker and Phillips have managed to create their own unique place both in the comics medium and amongst other noir tales. Any reader who picks up a Brubaker/Phillips comic knows who created it. Their work is unmistakable, containing a strong, unique voice. Its influence can be seen in the work of rising stars like Francesco Francavilla, Ales Kot, Justin Jordan, and Wes Craig. The power of their take on noir goes beyond elements of style and storytelling though. It can be seen in their investigations of feminism and the supernatural, themes not typically associated with the genre; the former of which already appears to have a potent place in The Fade Out.

The Fade Out is all about its characters. Hollywood, corruption, and the nature of fame are important elements, but each is presented through the comics' cast. The emphasis on characters begins before the story does with a role call of pictures, names, and basic information explaining who the significant players of the story will be. Although it makes for a nice collection of information, this page is largely unnecessary. The characters in The Fade Out enter the panel fully formed.

There is a large cast, larger than the introductory page would make out, but it functions because of how each person is presented. Everyone who appears comes with a history that is apparent in his or her speech and appearance. Narration helps lend some additional details as well. Although everyone holds some secrets, a necessity of any noir story, they also appear as complete people. This casting allows readers to already begin to make sense of the mystery, parsing out potential motives and theories. A solution may still be distant, but it's already possible to glean knowledge of the intricate relationships and potential secrets that shape this world.

That world also appears completely realized through Phillips' work. In a story so filled with secrets and hidden relationships, a casual glance or subtle expression can be all-important. Phillips places these understated moments in the center of each panel and plays small smiles and glares perfectly. Even a quick reading can pick up on some of the more subtle exchanges present. In addition to crafting characters that visually inform the reader, the variety of settings in 1940's Los Angeles blend historical accuracy with the dark insistent mood of the story.

All of this work, establishing characters, place, and mood, creates a platform for Brubaker and Phillips to explore the themes of this new series. Duplicity and business are parts of every page. Life in Hollywood in 1948 is fused with the movie industry. The parties, relationships, and jobs here are all part of the same industry. Every aspect of life is an aspect of Hollywood. The danger of this existence becomes incredibly clear when the central mystery of the comic is introduced. Lots of bad decisions are made very quickly. When an individual's job and life become so intertwined, the "right thing to do" becomes very difficult to define. Actors and producers come to possess far more power than they should, able to make decisions about justice and truth that lie far outside their purview. The metaphor of drama is ever present; characters play roles in their lives just as many do in films. Although the story occurs in a very specific setting, the allegories to modern life both in and outside of the entertainment industry are obvious.

Notes of racism, sexism, and anti-semitism are also peripherally present. The setting creates a place where these ideas cannot be ignored, but one that also allows for Brubaker and Phillips to naturally explore the repercussions of these harmful ideologies.

Brubaker and Phillips aren't making this comic alone. Throughout their combined career, they've worked with some other very talented collaborators. Elizabeth Breitweiser joined them for the first time in Fatale #12. She's a discovery as a colorist who fits the noir mood of these stories perfectly.

Film noir translates to "black cinema", an attempt to capture the appearance of the films that gave birth to the genre. Breitweiser captures that look perfectly in her colors. Shadows consume many panels. Light feels like an unwelcome intruder on most of these pages. Interior sequences are still portrayed accurately though. Whether a scene occurs at a poorly lit hotel, atmospheric late-night party, or simple office, the sources of light and their effects are clear. Yet the shadows are constant. Like a predecessor to modern smog, noir atmosphere hangs over Los Angeles in these pages.

David Brothers is on board as editor, the first Brubaker and Phillips have used on their work at Image. Brothers is one of the most accomplished individuals writing about comics today. His criticism and essays are must-reads for fans looking to learn about comics and gain a deeper understanding. His keen eye and insight are undoubtedly integral to this issue's success.

Like Fatale, The Fade Out is including special back matter in its print form. Readers who go to their local comic store for this issue will discover an essay from Bad Ass Digest co-publisher and film critic Devin Faraci. It tells the story of Peg Entwhistle, who committed suicide by leaping from the Hollywood sign. The thematic connections between his essay and the story are powerful, commenting on the role of the starlet and destructive potential in pursuing fame. It's a solemn, thoughtful read, and a perfect postscript to this debut. Readers who read their comics digitally may want to consider making a trip out for this bonus material.

The Fade Out #1 is an absolute pleasure for comic and noir fans alike. If you are just discovering the work of Brubaker and Phillips, then congratulations. If you're a returning fan, then I don't need to say anything besides welcome back.

The Fade Out #1 is available in stores and digitally August 20th.

ADVANCE REVIEW: The Fade Out #1 Is A Massive Success