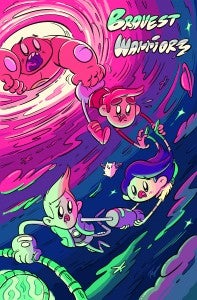 This weekend, Boom! Studios will debut Adventure Time creator Pendleton Ward's new series based on Bravest Warriors, his upcoming webseries for the new YouTube channel Cartoon Hangover. The series will debut at a launch party Friday night at Jim Hanley's Universe in New York, from 6-9 p.m. At the launch party, fans will have the opportunity to buy an exclusive edition of the book that can only be found this weekend, and see the first four episodes of the animated series. The series "follows the adventures of four 16-year-old heroes-for-hire in space," according to Boom!. The party will launch more than a week before the first issue hits stores on October 24, meaning that for the first couple of weeks the convention variants will be the only way to get your hands on the series--and attendants at the party can get their copy signed by animated Bob Flynn, who drew the variant cover, and writer/producer and Executive Producer, Breehn Burns.

Attack on Titan Explains How Eren Survived THAT Attack