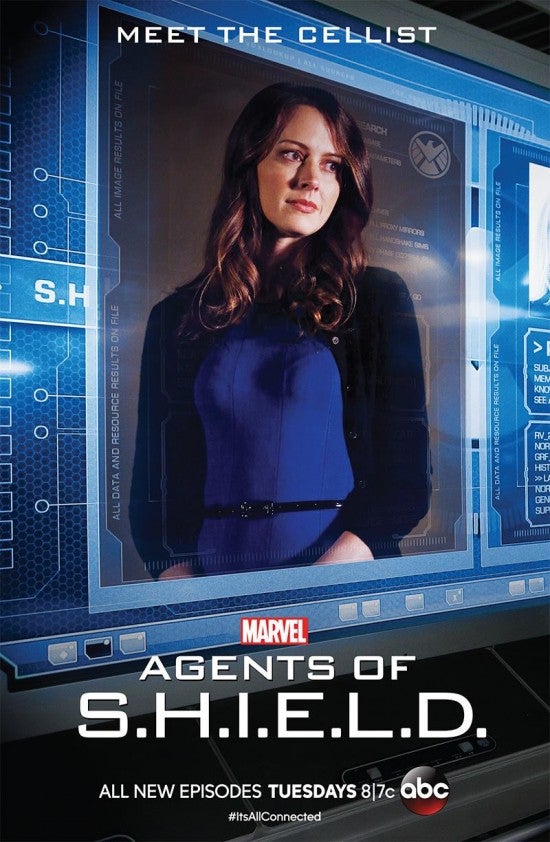 Ever since she was referenced in the first act of Marvel's The Avengers, fans have wondered when or if they would ever get a glimpse of the cellist Agent Coulson was said to be dating at the time of that movie. That time will come on Tuesday, when Marvel's Agents of S.H.I.E.L.D. sees Audrey the cellist pursued for reasons not yet known by Blackout, a minor Marvel Comics supervillain, and Coulson and his team have to come out of hiding to save her. It's a particularly dicey proposition for Coulson, who was officially dead by Nick Fury's decree even before he had all signs of his team wiped from the world and officially erased their existence. You can check out the new ad above, courtesy the official Agents of S.H.I.E.L.D. Facebook page. The episode airs on Tuesday at 8 p.m. EST on ABC. "The Only Light In The Darkness" – With their world turned upside down, Coulson races to save the life of his one true love as the mystery of "The Cellist," which began in Marvel's The Avengers, is finally revealed on Marvel's Agents of S.H.I.E.L.D., TUESDAY, APRIL 22 (8:00-9:01 p.m., ET) on the ABC Television Network. "Marvel's Agents of S.H.I.E.L.D." stars Clark Gregg as Agent Phil Coulson, Ming-Na Wen as Agent Melinda May, Brett Dalton as Agent Grant Ward, Chloe Bennet as Skye, Iain De Caestecker as Agent Leo Fitz and Elizabeth Henstridge as Agent Jemma Simmons. Guest starring are Bill Paxton as Agent John Garrett, Patrick Brennan as Marcus Daniels, Amy Acker as Audrey, B.J. Britt as Agent Antoine Triplett, and Patton Oswalt as Agent Koenig. "The Only Light In The Darkness" was written by Monica Owusu-Breen and directed by Vincent Misiano.

Agents of S.H.I.E.L.D. Ad Invites Viewers to "Meet the Cellist"

One-Punch Man Reveals Why Garou is Really a Hero