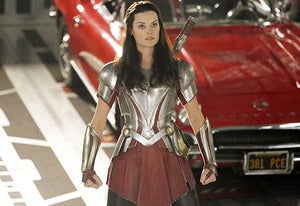 Could Lady Sif have been sent to Earth on an unwitting mission for Loki? That certainly seems like a possibility when you listen to what Marvel's Agents of S.H.I.E.L.D. executive producer Jed Whedon has to say about her upcoming appearance on the series. Read on only if you've either seen Thor: The Dark World or don't care about being spoiled. When Coulson's team is attacked by the Asgardian villain Lorelei (presumably because of their earlier incarnations with Asgardians in the Thor tie-in episode), Sif will arrive on the scene to help them out. The episode, titled "Yes Men," is scheduled to air March 11. "We always have our radar up for ways to tie our series into the Marvel films and bringing in an Asgardian really cements that connection," Whedon told TV Guide. "Lady Sif comes here on a hunting mission — sent by Odin — to find her arch-enemy Lorelei and bring her back to Asgard. It throws our agents for a loop when they find themselves in a fight right alongside this powerful woman from Thor's world." Of course, the fact that she was sent by Odin--whom we know to have been secretly replaced by Loki on the throne--raises some interesting questions about just whose side she's ultimately on, and whether Loki might be taking a special interest in Coulson's affairs. "Jaimie walked onto the set in full Lady Sif regalia just as she looks in the movies — from the huge, mile-high boots to the metal armor — and she towered over everyone," said executive producer and co-showrunner Maurissa Tancharoen. "It was so striking and impressive, all we could do was stare. It was very cool!" Marvel's Agents of S.H.I.E.L.D. returns to the air on February 26.

Agents of S.H.I.E.L.D.: First Image of Lady Sif, Details on Her Mission