Last night's series premiere of Marvel's Agents of S.H.I.E.L.D. had some cool moments--and left us with some questions, too. That's what it's supposed to do, of course; it's a TV pilot, and if it felt like everything was resolved at the end it would have been a TV movie instead, and could have been a very bad starting point for a new series. Things like what we'll discuss below give it some color and some flavor and help to establish the premise and consequences of the series ahead of time. What's Ward's family history? At one point in the show, Ward is told that his reluctance to work with Coulson's team is understandable--especially given his (Ward's) "family history." It's never touched on again, but we assume it will be. So--what's the family history they're talking about? This is probably not it, since it would be impossible to translate to film given his connections to Spider-Man, but there was a corrupt Senator named Ward who had multiple run-ins with S.H.I.E.L.D. and was actually a Hydra agent. 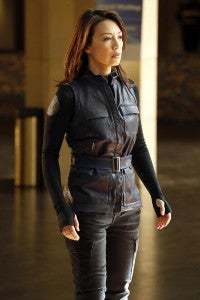 What happened to make May a paper pusher? Melinda May is not only an obvious badass (we saw her in action a bit in the pilot) but a S.H.I.E.L.D. legend, based on the way Ward responds to her. She's also, from what we've read, somebody who's got a past with Coulson. So how'd she end up in the basement pushing papers around? And why did she seem content to be there, as opposed to Coulson and Hill, who talked about how if they were taken out of the field they would miss it immediately? May didn't want to be back in action when she first got approached by Coulson, and then seemed to reiterate later that she wasn't particularly happy when she found herself in the field and in the line of metahuman fire. Who's The Doctor? Who is the mysterious doctor who was working on all those metahumans? Excuse us, "unregistered gifted." Well, it's hard to say--there wasn't any indication in Iron Man 3 as to who might inherit the Extremis program from Killian when he died. But a safe bet might be--especially since she's a pretty redhead--Sin Schmidt, the daughter of the Red Skull. That could be a great name to plant in the mythology of the Marvel Cinematic Universe for use later, since she probably won't show up right away in Captain America: The Winter Soldier. That's just wild speculation, but you can't say it wouldn't be fun. 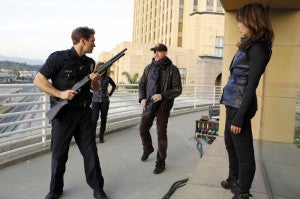 Will we be tied to LA now? Not only is Peterson's life (with kids and all) in Los Angeles, but Skye seems to have roots there, too. And while she could easily change the encryption on her files, at least so far she's got to be in her "mobile office" in the van in an alley in L.A. in order for some of her files to work. So, in spite of the fact that the show seems to be traveling the globe and in spite of the fact that almost every Marvel character ever published has been headquartered out of New York--is it possible this series could be set in Los Angeles primarily? 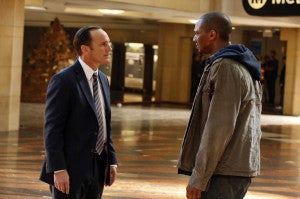 What happened next to Peterson? Here's the thing: ahead of the release of the series, there was a lot of speculation as to the identity of J. August Richards's character, and his eventual role on the show. Turns out, he was the villain in the first episode, but not the Big Bad, who remains at large. Meanwhile, he might have acted like a villain, but he did so with the misguided notion in his head that he was one of the good guys. So...what's next for him? It seems obvious from the ending that he's not going to jail for what he did--which, I guess, is something that S.H.I.E.L.D. can get away with, where a normal police procedural couldn't because those officers are confined to actually enforcing the law as it exists, not as Coulson thinks it should exist. But of course, Skye really did appear to have deleted Peterson from existence. That seems as though it opens the door to his being reintroduced down the line as a different Marvel Universe character. Who could that be? The obvious choice would be Luke Cage, since everyone thought that's who he was going to be ahead of time, but we kind of doubt it since so many A-list stars have expressed an interest in playing the character in a movie down the line. Marcus Johnson, maybe? That could certainly throw a wrench into the S.H.I.E.L.D. dynamic!