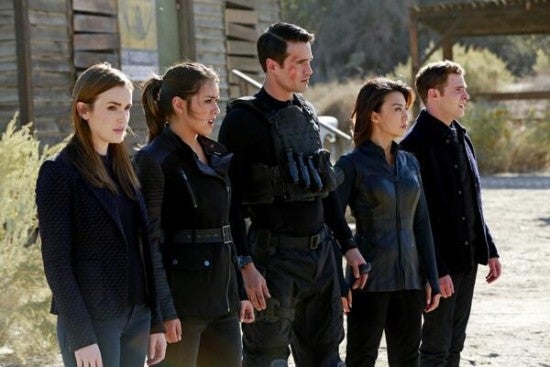 When Marvel's Agents of S.H.I.E.L.D. returns tomorrow night, it will face an uphill battle with critics who have said the first half of the show's freshman season has been too slow and it hasn't interacted enough with the Marvel Universe or fulfilled its promise to reveal the secrets behind Agent Phil Coulson's death and resurrection. Producer Jeffrey Bell promises that all of that is going to go out the window, as the next three episodes build frantically to what could have been the end of their series had they not been picked up for a back nine. "We're at the halfway mark in our 22 episodes, [but] when you first start you only have 13, so you know that you have to build towards something awesome in [episodes] 11, 12 [and] 13, because that may be all that you ever get," Bell  said. "When you're first laying out your season, you realize that things have to be coming together by then or you're doing a bad job." Certainly the midseason finale, which aired at the beginning of December and drew the series' lowest-ever ratings, started to feel like that was happening; the disparate mysteries of Coulson's resurrection and Skye's parentage were both inching forward, while elements from the series' pilot--notably Centipede and its onetime lab rat Mike Peterson (J. August Richards) reappeared in a big way. At the end of the episode, Peterson is apparently dead and Coulson taken by the bad guys, leaving the team demoralized and in disarray. "For us, this is right in the pocket of all the stuff we'd set up," Bell continued. "There's Mike from the pilot, and the eye from [episode] four, and Centipede stuff from [episode] five, and Coulson's journey and what's going on with Skye. We're taking all these pieces that we'd been setting up in more standalone fashion and we're showing the audience these are all actually connected. Hopefully we're gaining momentum and in the back half of the season we can really drive towards bringing all this together in a really exciting fashion."

Agents of S.H.I.E.L.D. Producer Teases Big Developments For the Next Three Episodes