The first half of a two-part midseason finale/premiere event, tonight's episode of Marvel's Agents of S.H.I.E.L.D. reintroduces J. August Richards as Mike Peterson, now an agent of S.H.I.E.L.D. himself rather than just an Extremis lab rat for Centipede.

Do they make the most of the opportunity? And will Peterson stay on after the holiday break? Well, read on...

The episode opened with the jail break we've seen in the preview scene; the shadowy man from "The Girl In the Flower Dress" is extricated by a handful of Extremis agents who blow a hole in the building and kill some guards while he sits calmly eating. 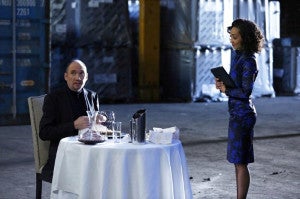 His name, for future reference, is Edison Po, according to credits.

Back at the Bus, Skye is looking into S.H.I.E.L.D. agents she thinks could be her mother. She's having trouble accessing anything more than Coulson has handed her since she has her bracelet on, but Coulson asked May to look into it for her.

Down by Lola, Ward and May are sparring and May knocks him on his ass, then credits it to having read his file, including a look at his combat preferences.

Coulson brings everyone into a computer room to show them the footage of the breakout, saying that finding Po and the Centipede soldiers is a priority. He also says Mike Peterson is coming to help them "fight fire with fire."

Cut to footage of Peterson tearing up a S.H.I.E.L.D. training field by pushing a tackling dummy attached to a bulldozer across the field. Coulson comes to tell him they need him to suit up.

On the Bus, May tells Coulson that it's a bad idea to bring Richardson on board. Coulson tells her that he lied to Skye and told her May is looking into the orphanage question. She's not happy. 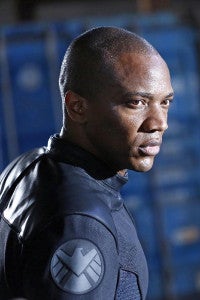 In the intel room, Ward is trying to convince the team that Richardson is a bad idea. Richardson comes in with Coulson, who introduces them all in as unfavorable a light relative to Richardson's shooting as possible. Richardson tells them that he appreciates that another team may not have let him leave Union Station alive, and he's in their debt. His kid is still staying with his sister. So, you know--he's available.

The team heads to Cleveland, where they've tracked the family of one of the Extremis soldiers via facial recognition.

In Coulson's office, he tells Mike to head to the lab for testing. He tells Simmons that he needs to eat significantly more than he used to in order to keep his energy up. He tells the pair that their gun saved his life by "freezing" his body just prior to his going critical. Simmons keeps saying embarrassingly flirty things.

Ward and Coulson, driving around in Lola in Ohio, briefly talk about women. Coulson mentions the cellist, but she's not allowed to know he's alive. Ward suggests recruiting her somehow to bring her into the cone of silence and Coulson tells him that's just asking for trouble.

On the Bus, Skye thanks May for her help looking for her family. May stonewalls her, saying they're on a mission. Skye shows May the prison visit video from "The Girl With The Flower Dress," from which they were only able to pull the sentence "The Clairvoyant does not like to be touched," as said by Po. Mike comes in and identifies Reina, saying she's the one who recruited him for Centipede. 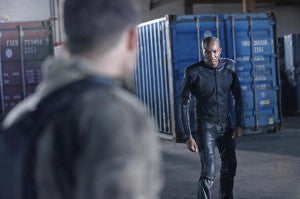 At Centipede's big warehouse hideout, Po is eating when Reina comes to see him, telling him that they need the Clairvoyant's help. The Clairvoyant "has trouble seeing the man you're looking for, and his weaknesses." Reina shows Po intel photos of the S.H.I.E.L.D. team, saying that they need to stop moving every couple of days so this team needs to be stopped.

One of the Extremis soldiers has "centipedes" not just on one forearm but all over his arms and back.

In Ohio, Coulson and Ward are getting a rundown on Reina. He speculates that Po is being used to train and lead the Extremis forces.

Agent Ward comes to see Laura Hayward, telling her that he's a representative for the lottery and that he won $50,000. She immediately calls her brother when Ward walks away, telling him that she's suspicious of S.H.I.E.L.D.'s story. The phone call tracks to Oakland.

On the Bus, Mike has a room set up in an interrogation cell. Skye comes to check on him and the pair chat about his kid. Coulson comes in to tell Mike they need him and to give him a super suit designed by Fitz and Simmons. Coulson has tracked Centipede to the factory but they want to do minimal damage to the facility and the people inside this time so they can get answers. 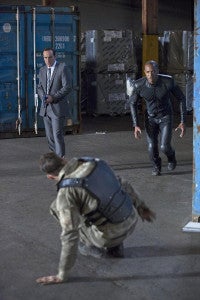 The field team makes their way quietly into the factory and it looks abandoned until they call Hayward's cell phone and he reveals himself. He and a handful of other Extremis soldiers are hiding out inside cargo containers. Coulson tries to knock one out with the Night Night Gun but he gets right back up. There's a fight and it ends up with th team out of commission as Mike has to fight Extremis soldiers alone. Finally they knock one down and the others flee; before he can speak though, he's remotely killed using the eye-thing from "The Girl With The Flower Dress."

Reina and Edison decide that Mike is the key to advancing their experiments.

Back in the lab, they figure out that Centipede designed the eye implants. Coulson wants Skye to track the feed like last time but they've upgraded.

Coulson leaves to update HQ. At their spot, Po tells Reina that he's spoken to The Clairvoyant and that he'll tell her the information he gleaned when he's ready. Reina is apparently smitten with the idea of the Clairvoyant, whom she does not know, but Po tells her that if she were to learn anything about him, Po would have to kill her.

On the Bus, May yells at Ward for taking a punch for him during the fight, but he tells her it was tactical, not emotional, and not to flatter herself. Skye shows up, and May goes off on her right away about the thing with her parents, telling her that if she can't focus on the job she shouldn't be here. She says that Coulson doesn't want to tell her the truth.

In her room, Skye tears up a bunch of papers and closes the door, crying inside and worrying Coulson.

Coulson brings Mike in to see him, asking why he hasn't seen his son. Mike says the last time his son saw him, he was a monster and his kid saw that. Coulson tells Mike he wants his help but that you can't fix your relationship with your kid from the road. Mike says maybe Ace is better off without him. Coulson says he chose the life at S.H.I.E.L.D., which is something that every agent has to do and it's not easy. He tells him that if you have someone waiting for you to come home, it's irresponsible to put your life on the line all the time without considering that. 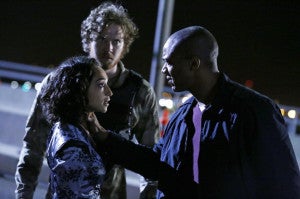 Mike calls Ace, who is playing with his Avengers toys that Mike bought him for Christmas. He tells him that he's going to come home and see him--Ace is there with Reina. They want to trade the kid for Mike so they can experiment on them and see what has his body stabilized. The rest of the team objects to the trade but Coulson and Peterson are insistent. Fitz and Simmons have developed an "odorless scent" and a machine that can smell it, so it's something only they would be able to detect and Centipede will never know.

Coulson escorts Peterson to the drop point, where Reina it's revealed that Mike sold out Coulson; that they never wanted Mike but his boss. The team freaks out, and Mike leaves Ace with Skye then starts chasing after the Centipede vehicle, only to be consumed in an explosion; they left bombs in all of the vehicles and traffic control devices on the bridge where the deal went down. Centipede get away in a helicopter, which takes shots at Ward, putting him out of commission as well.

On board the chopper, Reina tells Coulson that she wants to know about the day after he died.

Agents of S.H.I.E.L.D. Recap With Spoilers: The Bridge