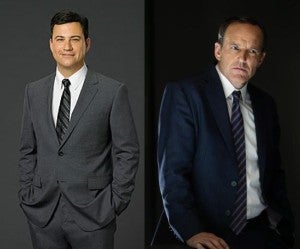 Agents Of S.H.I.E.L.D. has proved to be huge ratings hit for ABC. With the second episode airing tonight, the S.H.I.E.L.D. excitement won't end when the credits run. Agents Of S.H.I.E.L.D. star Clark Gregg will be making a guest appearance on the Jimmy Kimmel show later tonight. Kimmel and Gregg have been teasing the appearance all day on Twitter. Gregg tweeted, "Even tho he is basically West Coast Commander-In-Chief, @jimmykimmel is ignoring the shutdown & hosting me on his badass show tonight." On Twitter, Kimmel also revealed that in addition to Clark Gregg, his show tonight will feature Mia Grace, the four year old comic book expert. Do you think that he might have the pair compete in a comic book trivia competition? Agents Of S.H.I.E.L.D. airs on Tuesday nights at 8 PM ET on ABC. Clark Gregg's appearance on Jimmy Kimmel Live will air on Tuesday, October 1, 2013 at 11:35 PM ET.