Marvel announced today that they will bring their new series, Marvel's Agents of S.H.I.E.L.D., to New York Comic Con in a big way, with exclusive news and footage to be screened at the show. That's perhaps not surprising, given the fact that the series was officially announced last year at the show, bucking the trend of making your biggest announcements at San Diego Comic Con and leaving New York for smaller news. "New York is the birthplace of Marvel and home to some of our greatest fans, so we're bringing them an awesome Marvel's Agents of S.H.I.E.L.D. experience," said Loeb. "Not only do you get a Level 7 sneak peek at the future of Marvel's Agents of S.H.I.E.L.D. at New York Comic Con, along with a few more surprises you'll hear about pretty soon, you'll also get to see Lola in person for the first time ever! Just don't let Coulson see you trying to take her for a ride!" The series debuts on Tuesday, September 24 at 8 p.m. on ABC, with whom Marvel is said to be developing at least one more series. 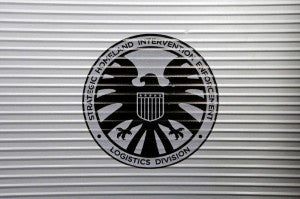 Here's the official rundown of the weekend's events, per Marvel:

First, visit the Marvel Booth (#1354) beginning on Friday, October 11 for a chance to (almost) touch Lola! That's right, the iconic vehicle of Agent Phil Coulson (Clark Gregg) will be on display for the first time ever to the public and this is your once-in-a-lifetime chance to see--and be photographed with--a piece of Marvel history! Plus, fans can pick up an exclusive "Marvel's Agents of S.H.I.E.L.D." mini-poster (while supplies last) in the Marvel Booth to show their support for everyone's favorite elite international agents. Then, on Saturday, October 12 at 5:00 p.m. ET in the Main Theater, join Marvel's Head of Television Jeph Loeb for the "Marvel's Agents of S.H.I.E.L.D." on ABC panel for your first look at new footage from the series and access to exclusive news before anyone else! Can't make it to the convention? Follow along on the Marvel Events App and events.marvel.com, the best way to get exclusive videos, real-time announcements from the convention floor and up-to-the-minute panel, in-booth, and signing schedules of all your favorite Marvel creators!