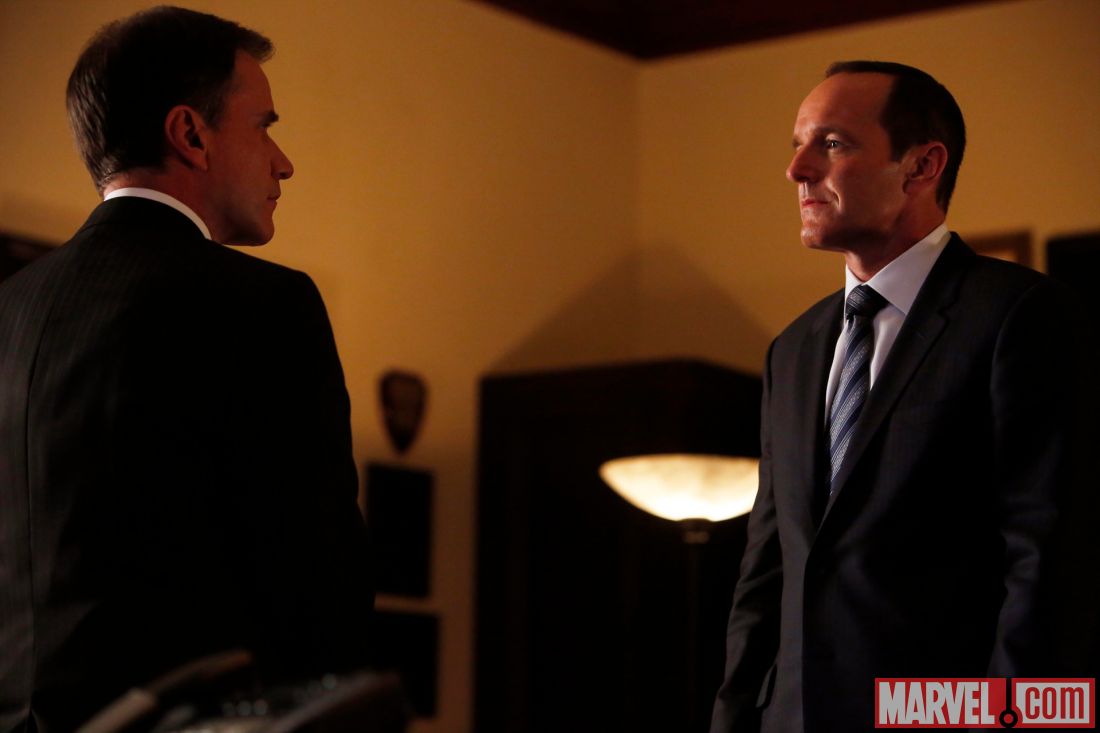 General Talbot is recounts the events of The Avengers in front of a United Nations committee. He says they thought they could trust S.H.I.E.L.D., but that’s not the case. The delegate from Italy asks for proof. A group of “S.H.I.E.L.D. agents” bust in, kill the Italian delegate by disintegration, and take over the building.

Agents Simmons and Skye are watching Ward go through his morning routine until May comes in with news of the attack. Coulson believes its Whitehall trying to turn the public against S.HI.E.L.D. Simmons recognizes the weapon from her time at Hydra. Morse knows the scientist responsible, Toshiro Mori. Coulson sends Morse and Hunter to find him.

Talbot reports to a senator about the incident. The senator is angry that Talbot has failed after receiving such large amounts of funding. Talbot accuses the senator of simply being worried the public will find out about his brother. The senator’s name is Christian Ward.

Senator Ward is on television ranting against S.H.I.E.L.D. Coulson and Skye watch and wonder if Christian Ward is Talbot’s “senator with deep pockets.” Skye decides to go see if she can get information from Grant. Coulson contacts an Agent Walters in the Netherlands and tells her to go dark.

Morse tries to make small talk with Hunter, and he reciprocates. She’s heard the terrible stories that Hunter has been telling about her. Things get tense and Morse goes to the cockpit with May. She asks if May has ever been married. May says she has, but doesn’t speak to him anymore.

Simmons joins Fitz in the lab. She has the hard drive she took from Hydra and asks for Fitz’s help examining it. She says it needs to be repaired before they can access it.

Ward tells Skye that she needs to stay away from Christian, that he’s not what he seems and will use them to get to him. He tries to warn her that they’re in danger if Christian knows where he is. Ward brings up Skye’s father again. She says her father is a murderer, letting Ward know that she’s found him. Coulson shows up and shuts the conversation down, accusing Skye of slipping.

May, Morse and Hunter make a plan. Morse decides to go in with her Hydra cover. Morse meets Mori and they kiss. Morse and Mori sit down for tea and Mori brings up the rumor that she works for S.H.I.E.L.D. Morse deflects by pointing out that Hydra is pretending to be S.H.I.E.L.D. She asks about his weapons. He says they’re called splinter bombs, and that they came from old Hydra tech that he got from Whitehall. He says he was given access the Diviner. Hunter intercepts a message to Mori’s security showing Morse helping Simmons escape. He goes in and he and Morse take out the security, then argue about it. May interrupts them. They picked up that Hydra was going after Beckers, and Belgian politician who supports S.H.I.E.L.D.

Fitz and Simmons are still working on the hard drive. Simmons keeps trying to help Fitz finish his sentences, but getting it wrong. Fitz voices his frustration. He upset that Simmons left, accuses her of giving up on him. Simmons walks away as Mack enters.

Christian Ward walks into his room and Coulson is waiting. Coulson introduces himself. He hands Christian a speech that he’s made some edits to. Christian tries to call out, but Coulson has the phone blocked and says his security won’t be checking on him. Christian says he won’t change sides on S.H.I.E.L.D. because the people need a simple enemy. Coulson brings up Ward and tells Christian that he has Grant in basement. Skye turns off the surveillance in Ward’s cell and goes to speak with him again. Coulson tells Christian that he knows all of the terrible things he did because of what Ward told him. Christian says it’s all lines. At the same time, Ward is telling Skye that everything Christian says is a manipulation. Christian recounts his childhood, saying he could never leave Grant alone with Thomas, their youngest brother, because he would attack him like a man possessed. Skye asks Ward about her father. Ward tells her that her father has killed people, but only because he loves her. He says the villagers that The Doctor killed were really Hydra agents who killed Skye’s mother. Ward says he can only help her find him if they go together. Now knowing everything that Ward knows about her father, Skye reveals that Ward is being transferred to Christian’s custody.

Coulson tells May that he struck a deal with Christian. May’s team is on route to intercept the Hydra agents going after Beckers. Those Hydra agents receive Beckers’ location.

Simmons brings some tea back to the lab and finds that Fitz and Simmons have figure out what Fitz was piecing together in the back files. They trace the bombs back to a Vincent Beckers, and Simmons says they need to find Coulson.

Coulson is talking with Ward. Ward says he thought they were rebuilding trust, and that Ward was still on his team. Coulson doesn’t says he’s not. Ward says Christian is using him to gain political power, but Coulson says he’s aware of what he’s doing. Trip comes and finds him.

The team explains that Vincent Beckers is Julien Beckers’ grandfather and that he’s likely still Hydra’s ally. Coulson says they’ve been played and that they need to reroute May and team to their Belgian safe house.

Walters walks into the safe house and finds Beckers there. Her agents are dead. Coulson realizes that Beckers was claiming his country was safe to lure S.H.I.E.L.D. agents into a trap. The Hydra agents they believed were going to kill Beckers kill Walters instead.

Hunte renters the safe house pretending to be a merc looking to turn S.H.I.E.L.D. agents over to Hydra. Morse and May bust in through the windows and a fight breaks out. Hunter saves Bobbi from catching a splinter bomb. They call Coulson and fill him in on the casualties.

Simmons approaches Mack in the garage. She thanks him for helping Fitz. Mack says he doesn’t need help.  Mack says the only thing that seems to make Fitz worse is Simmons. Simmons says she knows, and that’s why she left.

Hunter packs his things and is set to leave, wanting to keep out of Bobbi’s way. Bobbi tells him not to die out there, but that if he wants to stay he should stay.

Coulson brings guards for Ward’s transfer. Christian holds a press conference at the United Nations, referencing the attack. As Ward is leaving, Simmons tells him that if he ever sees him again she will kill him. Talbot tells May that they got Beckers at the border. May says they lost six agents, and Talbot shows sympathy and shakes her hand. Christian announces that his brother was a traitorous member of Hydra. Coulson warns the guards not to give Ward an inch. Ward tell Coulson to let Skye know this doesn’t change anything, that he’ll still keep his promise. Christian says he’ll make sure his brother is punished for his crimes. Ward slips out of his hand cuffs and takes out the guards.

A man walks into a tattoo parlor to finish off a tattoo that looks just like Coulson's mysterious alien writing.