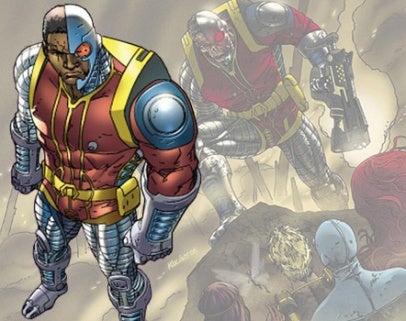 Warning: Spoilers ahead for tonight's midseason premiere of Marvel's Agents of S.H.I.E.L.D., titled "The Magical Place."

Marvel's first live-action television series may have found its first recognizable Marvel superhero. It never seemed particularly likely that Mike Peterson was actually dead when he walked into an explosion and vanished at the end of the Agents of S.H.I.E.L.D. midseason finale last month--but when S.H.I.E.L.D. said they'd found charred remains at the site and Peterson never turned up to help save Coulson in a last-minute surprise, many fans probably thought that the show had actually killed of J. August Richards's character. It seemed so oddly out of character for a safe, inoffensive show like S.H.I.E.L.D. to kill a guy in front of his young child in prime time, though, that as soon as we saw a body beginning to stir from under a sheet in some kind of dingy medical facility, you had to know it was going to be Mike. What came next, though? Pretty surprising. That's because in tonight's post-credits sequence, Richards sat up from his deathbed--and we saw that his face was bloodied and scarred, and he was missing a leg. Combine that with the Eye Spy device planted in his head, and you've got a lot of fans wondering whether we might have seen the Marvel Cinematic Universe birth of Deathlok. Here's how the Marvel website describes the Michael Collins version of Deathlok, an African-American family man that shares quite a few characteristics with Mike Peterson: >Michael Collins had the perfect life: a loving family and a rewarding, high paying job at Cybertek, a division of the Roxxon Corporation. While going over his computer code which he thought was being used to help those in need control artificial limbs, he discovered that his work was actually going into a killing machine project codenamed "Deathlok". Turning to his boss and friend, Harlan Ryker, Michael shared his discovery in hopes that Ryker would do something about it. Ryker was behind the Deathlok project as well as many other projects destined for military uses, so he betrayed Michael and had his brain placed into the Deathlok cyborg. Michael awoke from the transfer, unable to control the functions of the cyborg. He watched helplessly through his new cybernetic eyes as it carried out a test mission, killing some soldiers in the process. Slowly, Michael found he could control the actions of the cyborg, and he immediately set out to pursue his old friend Ryker. Deathlok caught up to Ryker in the act of making an illegal arms sale to a private army. Before turning him in to officials, he learned from Ryker that his human body still existed, and he could be restored if he could find it and the doctor who performed the transfer. Deathlok set out on his quest to find his body, and return to his perfect life with his family. Obviously not all of that fits Mike Peterson, but a lot of it could be tweaked slightly to make it fit--and the missing limb and scarred face would jive, too. What do you think? Is this the Marvel character that's been teased by Clark Gregg? Furthermore, if it is Deathlok and Peterson is about to start being used as a tool against his will, is it by Centipede again--or by S.H.I.E.L.D.? After all, S.H.I.E.L.D. told the team that they found a body, but if they did, it's not clear who that body might belong to. Certainly Centipede couldn't have easily returned to pick up Peterson's damaged body, since S.H.I.E.L.D. was onsite with backup en route when the explosion occurred. Meanwhile, we spent most of this week's episode asking ourselves just how far S.H.I.E.L.D. would go, how much they would lie and hide from their own agents--and just what Victoria Hand was after. Could the Deathlok project turn out to be something that S.H.I.E.L.D., not Centipede, is launching? If so, how will Peterson, Coulson, Skye and the rest react when they find out? And if not, how can they explain Peterson's body ending up with Centipede instead? It feels like there has to be a missing piece in that process somewhere that will be addressed the next time we see his character onscreen. J. August Richards has been a fan-favorite so far, and the "Eye Spy" episode one of the series' best. The idea of putting those two together and making a Marvel superhero out of it has to be pretty attractive to the writers. Whatever it is, there's big plans for the future. "How about that ending to AgentsofSHIELD?" Tweeted Arune Singh, Marvel's Executive Director of TV Communications. "Just wait till what comes next..."

Agents of S.H.I.E.L.D. Spoilers: Was that Deathlok?!