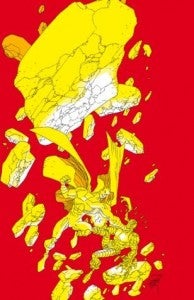 The release of this week's Supreme #65 sees both the title character and the world he lives in, in a pretty terrible way. The ramifications of Supremacy crashing down on top of the city below are beginning to be felt, and Supreme and his allies--stripped of their powers--can't exactly help clean up after the disaster.

Worse yet, when Supreme (you know, the main one--the one Alan Moore was writing) tries talking to the cops and getting them out of the situation without revealing that he and his extradimensional doppelgangers are without powers, that's the moment the "Mean Supreme" (the one Rob Liefeld used to write) decides to show up and disappear with the remains of the satellite.

Writer/artist Erik Larsen joined ComicBook.com to talk about the issue, and what to expect from the series in the near future.

What made you go with the cover’s color scheme?

I wanted to try something different that would stand out.

The Mean Supreme has a very Rob Liefeld look to him; are you tweaking your style just a little to accommodate the book or was it just this one particular character? (Or am I just crazy?)

I'm trying to push him toward that, yeah. I don't want Moore's Supreme and Rob's Supreme to be indistinguishable from each other. Pushing Moore's toward Chris Sprouse and Rob's toward Rob seemed to make sense. We're not trying to be super overt about it but it's something I'm trying to keep in the back of my mind.

Is there a particular reason that the Mean Supreme says he doesn’t want “him” getting his powers back instead of them?

The others aren't "real" to him. A mouse and a lion and whatnot aren't really his replacements or necessarily challenges. The Original Supreme was akin to the Golden Age Superman--so he's vastly less powerful than what later versions became and the rest--are more sidekick fodder as far as the Mean Supreme is concerned.

We talked a little bit about how the government would react to a situation like this, and you kind of downplayed it. So are we to assume that it won’t be a long-term story, dealing with the repercussions of the fall?

That's not as dynamic and interesting to me as a lot of the other stuff. So I'm skirting much of that backstory to get to the more interesting parts. I'll suggest enough that readers get the idea.

Ahh, there’s nothing like a SuperPatriot appearance. Brother is pretty busy this week!

As it turns out, yeah.

It feels like it’s been a while since SuperPatriot’s old-timer backstory has been revisited. Is it safe to guess that we haven’t seen the last of him in this title and that the scene we saw this month is important in terms of setting the stage for newer readers?

It's something I'd like to explore, certainly. But the point was as much to have a familiar face from Moore's run as well as it was to dip a toe into my corner of the Image Universe. SuperPatriot was in a few of Moore's flashback stories during his run and I wanted to establish that those still counted to some extent. It's a curious thing to explore, this notion of characters getting replaced and swapped out in their world as creative teams shift in ours. The rules aren't clearly defined but I'm doing the best I can to make sense of it all.

It’s interesting—in both Dragon and Supreme right now you’ve got the title character taking a fairly active role on the sidelines while someone else headlines the book. You’ve suggested that it’s a permanent or at least semi-permanent arrangement over in Dragon; is Suprema as a headliner something that will take a while to fade out here?

It's not her book. It's Supreme's book. So, while she is the only other one with powers currently, that doesn't mean it's her book. Things have changed. The idea is that the book now stars a bastard and a bunch of has-beens looking to reclaim their crown. It's something we haven't seen a lot of in comics--but given the fact that he's had a lot of time to stew about it--our "star" is essentially the bad guy of the piece. Although, to be fair to him--there are worse guys out there. Much worse.

With the anthropomorphic animals in the book, is it difficult to kind of balance those characters who look kind of silly on the surface with the hardness of the actual underlying story?

That's what I do. I love that kind of stuff actually.

That asked, you’ve got a heck of a talking-animal surprise on the last page. Why did you decide that he would be the one who lived to fight another day?

Because he's the one that was farthest removed from what the original was. Part of the problem for me on the book is that so many of the characters are so derivative. In most cases my choices have been to find the versions with the most distinctive voices so that, at the end of the day, it's not just another take on Superman. It becomes its own unique title. I don't think this book needs a Lex Luthor knockoff--not unless he's got enough of a twist to be more than that.

Are you at all concerned that the various Supremes undermine the importance of “our” Supreme? Once this story is done, what are the odds that we’ll see them return home?

At this point I'm not sure what you mean by "our" Supreme. Alan's Supreme? Rob's Supreme? But the short answer is no, I don't think so as long as they all have something unique to offer. Fawcett had a bunch of Captain Marvel characters and they peacefully coexisted. In many ways that's what we have here. None of them duplicate each other. And who's to say which one is left standing when this story comes to its conclusion? I'm not telling.

We've also got some bonus questions this week from Gavin Higginbotham, who routinely runs the Savage Dragon conversations for us.

Mean Supreme dumping the Citadel on the Moon could be seen as two ways. He mentioned the weapons and his desire to keep New Supreme powerless.

Did he move the citadel's remains to gain access to the weapons himself or just to keep them out of the Supremes' hands? Mean Supreme seems too arrogant to want to resort to using weapons but at the same time, he's not stupid, right?

Both, really. He wanted them far away from anybody who might have reason to get them.

The various Supremes may be powerless now but are they just ordinary humans. Fifties Supreme retains his animal appearance, but does he possess any extra strength, speed, etc like an actual lion?

I don't think so. He's pretty much a human with a lion head and hands--an amalgam. If there's any additional strength or agility it would be minimal.

Supreme shrugs off SuperPatriot's attacks and defeats him with ease. SuperPatriot is one of the toughest heroes on the planet and he gets whupped as if he was nothing.

So... Is Supreme the biggest badass on Earth?

What was it about Suprema that you chose her out of all of the Supremes to keep powered?

I thought it was an interesting choice and unlike most of the others she's not a Supreme variant--Original Supreme was the one-and-only Supreme at one point--'50s Lion-Headed Supreme was Supreme and certainly "new Supreme" was the main Supreme for a time (and even in his universe--Squeak the Supremouse was their Supreme). Suprema was never the lead. She was never Supreme. She was always a supporting character.

With Darius Duck being the sole Dax to survive, will he be using any of Dax's resources? Or were things like Torquemada destroyed during the massacre last issue?

There's a question of what remains. Remember, prior to Alan's run on the book there was no Darius Dax in the Supreme book. Now that things are reverting to that reality to some extent--will he have a lair? Will he have those marvelous inventions? Time will tell.

Over in the pages of your other ongoing series, Savage Dragon, you used a Superman homage called Solar Man who shared some of Mean Supreme's characteristics.

Are you seeing Supreme as a chance to tell other stories that didn't quite fit for Dragon? Are those two characters similar in power levels?

Solar Man took on the best of Image's heroes such as Spawn, Witchblade, Shadowhawk and Invincible and more than held his own With Mean Supreme effectively being the antagonist, just how screwed are the heroes that may try to stop him?