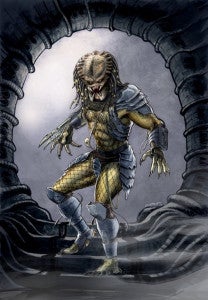 Dark Horse Comics will relaunch a number of comics set in the shared universe of the Alien and Predator movies--four of them, from different creative teams and with slightly different creative mission statements but all connected in a way that previous series based on the properties have not been. Art teams and exact release dates are still not firm, but Chris Roberson will write Aliens, Paul Tobin will take on Prometheus, Chris Sebela will write Alien vs. Predator and Joshua Williamson will write Predators. These writers are fairly used to working together; Chris Roberson is the co-founder of Monkeybrain Comics, where he (Edison Rex), Tobin (Bandette), Sebela (High Crimes) and Williamson (Masks & Mobsters) all have ongoing series. "Everything in the original movies is canon as far as I'm concerned," Roberson told io9. "We won't be directly referencing anything that happened with Ripley and company, but nothing that we'll be doing will contradict or conflict with anything we've seen before, either." "We're definitely focusing on original characters," added Tobin. "I think the Prometheus movie opened a wealth of questions about the nature of the Engineers, and the aliens, and the universe as a whole. It's interesting how some people watch the movie with a feeling of, 'Oh, well, THAT answered some questions!' and others have a different reaction, seeing the work as a springboard for even further mysteries to be answered, for more to be explored. Myself, I love to focus on what's still out there, both in the glory of exploration, and the horror of finding out answers you're not ready for. New characters fit us best for those purposes." Not all of the writers are going to look to all of the films for inspiration, though; Sebela told io9 that the AvP movies are basically off the table--as are the Dark Horse Comics that inspired the films. "I'm just sticking with the solo movies, because I think they build up an interesting mythology of their own that fits in well with the world we're building," the writer said. "I think the AvP movies have a lot of interesting things going on, but they seem to exist in their own little bubble, one that's very far away from ours, and, personally, I want to keep myself as free of all past AvP encounters, to start from a clean slate and build my own take on this mythical face-off." "In keeping with the theme of the originals, we've created a great cast of characters to battle our Predator," Williamson said. "One thing I'm personally excited with our take is that there are no good guys in our Predator comic. Not really. Closer to anti-heroes, who are out to survive at all costs. The main guy will be a bad ass dude named Galgo, who would stab anyone in the back to get what he wanted. His interactions with the Predator have been… interesting."