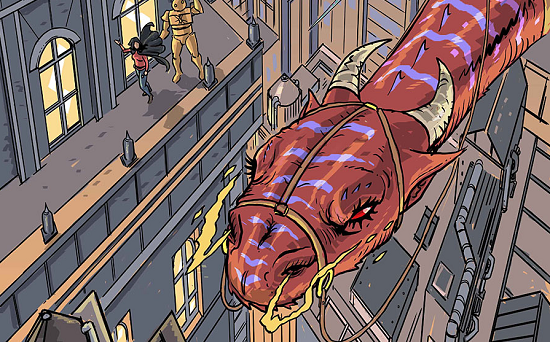 The second story arc in Monkeybrain Comics's Amelia Cole ongoing has drawn to a conclusion as this week saw part six of Amelia Cole and the Hidden War by D.J. Kirkbride, Adam P. Knave and Nick Brokenshire. As ever, Kirkbride and Knave (and, this month, with a little help from Brokenshire) joined us to have a discussion about the issue and what it means for the long-term story.  Check it out below! But first... 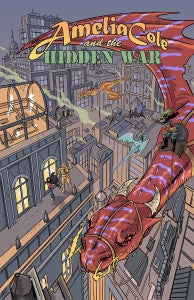 ComicBook.com and the creative team behind Amelia Cole will be doing five giveaways between now and when Amelia Cole: The Enemy Unleashed is released in February. Each giveaway will be for ComiXology copies of all 12 issues of the series' first two volumes, and our first two giveaways will be on Wednesday, December 11. To be considered, just e-mail russburlingame@comicbook.com with "Amelia Cole" in the subject line and a short statement telling us why you want to give the book a try. We'll take submissions right up until noon on Wednesday, when we'll select two at random. Anyone who didn't win this time, we'll keep hanging onto your entry until February and consider you for each subsequent giveaway along with the new entries. And, of course, spoilers on for this interview. If you haven't read #12 yet, go grab a copy and read it through with us. ComicBook.com: Between the Big Twist and the first page, there's a lot of emphasis placed on the role of non-mages this month. Was bookending those two sequences an intentional thing? D.J. Kirkbride: The clean bookending was a happy accident, but the emphasis on non-mages is important to our continued world building and the overall story arc. Adam P. Knave: Yeah we never wanted to show only half the picture and non-mages are just as important. ComicBook.com: I always kind of assumed that magehood ran in families. Do you guys have a specific plan for how it all works? APK: We do! And it's actually not complex. It runs in families but also if one parent is a mage and the other isn't… well it can go either way. DJK: Like left-handedness or the ability to rap well. 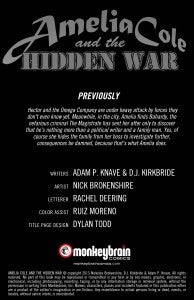 This may have played into an earlier issue and I forgot, but it seems worth noting here that the improvised explosives hurt the monsters without the energy from the blast being absorbed. Safe to assume they can only feed on magic energy and not just from whatever, like Parasite in Superman? DJK: Their magic draining is what we're most concerned about, but they also turned out the lights in city at one point just by their presence. The physical attack of the explosive and the shrapnel actually harmed them, whereas a blast of magic just makes them stronger. Tricky beasts. APK: Also we never said they just sucked magic. Some types of energy yes - some no. The kinetic energy from an explosive is different from magic or electricity, say. ComicBook.com: Amelia's narration box about putting herself out of work makes me think: Is she just inherently more effective as a Protector because her efforts to defend non-mages mean she's getting a higher volume of baddies off the streets? I mean, it seems self-evident but I never really thought about the fact that certain offenders just wouldn't be pursued in the old days. APK: The tag on the teaser for this volume was "Protect EVERYONE" so yeah we wanted to subtly show that Amelia isn't playing by the rules she's protecting mage and non-mage alike. And there are non-mage cops, sure, but having her taking care of both sides of the street is very effective, really. DJK: She's also just crazy dedicated. I mean, she's not crazy, per se, but her level of dedication to trying to help and protect does at times reach unhealthy levels some might say. It's bad for her social life but great for folks in need. 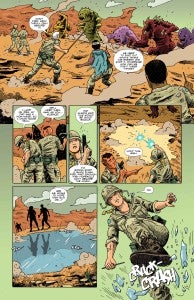 I may have asked this before, but any particular reason you went with narration boxes? This book feels like it would have been a good candidate for thought balloons. DJK: That's an interesting thought that...honestly didn't occur to me. Caption boxes are cool, but I love thought balloons! Shoot. Did we ever discuss and decide against that, Adam, or did we both just naturally go with caption boxes? APK: I didn't think we ever discussed it, no. Caption boxes just happened to be the way we went naturally. ComicBook.com: The absolutely maniacal look on the short, black security guard's face might be my favorite expression in this issue. The way he's holding the gun really sells it too. DJK: Nick is amazing with the acting in this book -- from looks of determination in the action to the quitter discussions to a wry smile to the silly physical comedy. He makes something that might be kinda funny in the scrip hilarious in the finished comic. ComicBook.com: Nick's style is evolving month by month, I think. Here, he's embraced a bit simpler look for some of the characters, giving them a kind of Terry Moore-ish, almost comic-strippy feel. Was that intentional, or just experimentation? (Or am I full of crap? I could be full of crap.) DJK: I don't know how much of it is intentional. The evolution seems to be just something that happens from drawing so much month to month, issue to issue. But...why not check with the man himself? 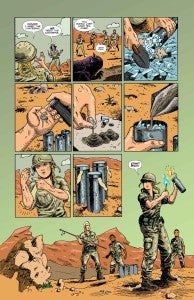 SPECIAL GUEST STAR NICK BROKENSHIRE: You're absolutely correct that my style is constantly evolving. Things get streamlined as you try things and the result of the streamlining is what ends up becoming your style. So yes, the characters have become more streamlined. I appreciate the Terry Moore comparison! ComicBook.com: Now, the last time I asked you about the Magistrate forgetting his wand, you guys handwaved it, saying essentially that it's like forgetting your cell phone: no matter how essential something is, you sometimes lose track. Does that still hold true now that we know what we know about The Magistrate? APK: No, we lied. Because this whole time you've been doing this, Russ, you've been onto this reveal. And we hate to lie but we had to protect the story. So we lied as un-full-of-lies as we could manage. Sure some mages forget wands, they're busy. It's possible. But we've been building this since we first saw him in volume one. Go back and look. But keep in mind you've seen one thing, not the whole thing, not yet. There are edges to it that might stick out, but there's a reason for that, too. We have been very careful. DJK: Our pants are on fire. Sorry, man. ComicBook.com: When I write about The Magistrate, should I capitalize "The" like I do when I write about "The Governor" on The Walking Dead? DJK: I usually do, same with The Protector. I think. Do you do that, Adam? APK: Yup, they're both job titles. 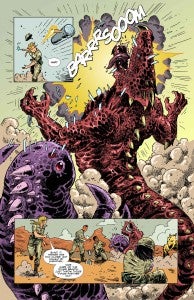 Seems a lucky coincidence that Amelia came up with an excuse that would have been found to be true if anyone had bothered to look! APK: Luck happens. But it really was just luck. DJK: Good point. Yeah, while her life is filled with bad luck, once in a while the luck can be good. ComicBook.com: Are the security guards non-mages? DJK: Their guns make them look like non-mages, yeah. Good catch. Honestly, there's not much call for action with that particular job, so even The Magistrate, or the role he's playing, would be fine with non-mages doing it. You can be sure the building is under some spell protections, too. APK: I don't think it would be odd for a mage to have non-mages as part of his security force. Just in case. We've seen non-mages threaten the city for political reasons, after all. ComicBook.com: If so, is that because The Magistrate (I'm owning the "T") prefers it that way and feels more comfortable around them? DJK: It's mostly a PR thing, giving an inch here and there, trying to show that he works with "them," and whatnot. APK: And it is well-rounded from a security point of view. He's not dumb, our Mag. ComicBook.com: I feel like at one point the plan was to tease out The Hidden War for 12 issues. Is the new subtitle something that you can do just because you retitled the series anyway, so why not? APK: Again with the whole we tend to be truthful here. Originally Hidden War was 12 issues. But we realized for trades and such, discrete volume names are helpful. When I say we I mean "D.J. realized this" and he's right. So we adjusted. DJK: Yeah, originally we were going to have Amelia Cole and the Hidden War Part 1 and then a separate Part 2, but that seemed cumbersome, especially with the volume numbering on the spine of the books. When we realized we had a great stopping point right here, and that the titles really do refer to the story at those points in the books, it all just made sense. It's kind of a mean cliffhanger, sure...but we have meaner in store. ComicBook.com: Is it tough to find a jumping-on point for new readers with a series like this, that has no recognizable properties or PR budget? I mean, I would think having the entire run available cheap would help with that. DJK: Yeah, the price of digital helps. Also, we do have handy recaps and try to keep the storytelling clear. When I was a kid, I picked up books at random issues but still enjoyed them regardless, and my hope is that a kid could do that with Amelia Cole, too. ComicBook.com: How long before The Enemy Unleashed? Just a month, or a little longer? DJK: We're aiming for February, to give the team a bit of a holidays breather and all that. We've seen some art come through for Amelia Cole #13: The Enemy Unleashed Part 1, though, and it'll be well worth the wait!

Amelia Cole: Kirkbride and Knave Talk the End of the Hidden War, Enter to Win the Full Series