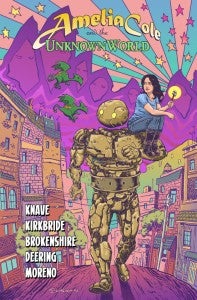 The first print volume of Amelia Cole, the digital-first series from Monkeybrain Comics and creators D.J. Kirkbride, Adam P. Knave and Nick Brokenshire, has sold out and will go back for a second print, the creators announced today on their Tumblr page.

They caution that the second printing may not be ready in time for Christmas, so fans who want a copy of the book as a holiday gift would do well to order from a retailer who isn't sold out yet soon.

We just learned that Amelia Cole and the Unknown World sold out its print run and is going back to print! This is fantastic news! HOWEVER - you want a print trade for a holiday gift, we suggest you go to a store or hit up Amazon NOW as we do not know how many are in the wild and new copies might not show for a few weeks… Holy wow, you guys. THANK YOU so much for the support!

The commentary track that runs at ComicBook.com for each new issue of Amelia Cole and the Hidden War is a bit late (that's entirely my fault), but it will run here soon. We'll see about getting some of those trade collections!