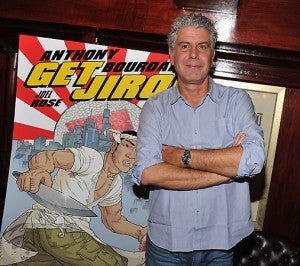 Famed foodie Anthony Bourdain appeared last night at Les Halles Downtown in New York, one of the restaurants he owns, to launch his new graphic novel, Get Jiro. The book will hit stands next week from Vertigo, DC Entertainment's creator-participation/mature readers imprint.

Co-written with novelist Joel Rose, Get Jiro revolves around a near-future world where America’s twin obsessions with food and violence have led culinary masters to fill the roles currently occupied by crime lords. The story serves the same purpose as films like Man Bites Dog and Series 7: The Contenders, taking a pop cultural phenomenon to an extreme and creating a surreal action comedy along the way.

Bourdain hosted a launch party attended by a number of DC Entertainment executives and staffers, food writers and reporters who all enjoyed a sampling of food that inspired or appeared in Get Jiro.

Bourdain is the latest in a string of high profile writers and celebrities that have been trying their hand at comics. Ever since filmmaker Kevin Smith wrote a best-selling arc on Daredevil a decade back, it seems like every time you turn around there’s a new familiar face behind your favorite comics. Milo Ventimiglia, Stephen Colbert and Stephen King are just the beginning, and following on the heels of Bourdain’s release, New York Times-bestselling investigative journalist Greg Palast will be releasing a comic based on his reportage in the back of his next book, out in mid-July.

Bourdain recently announced that he will be leaving his popular Travel Channel series No Reservations to launch a new series on CNN, where he will also serve as an arts and culture talking head on the network’s entertainment news coverage.

Get Jiro will be available in direct market comic book stores on Wednesday and then a week later in the bookstore market.

Is Dungeons & Dragons Heading to Icewind Dale for Their Next Adventure?