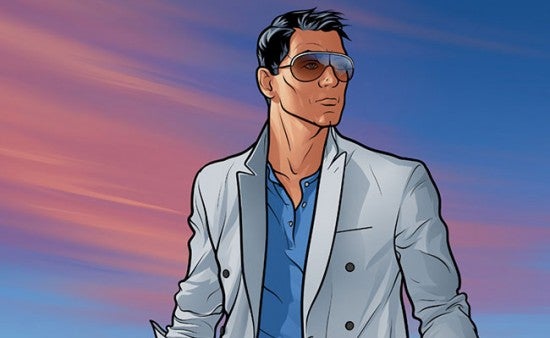 In a new interview with Uproxx, Archer Executive Producer Matt Thompson dropped the bombshell that FX's twisted super-spy comedy will cease to be about super-spies this year, carrying the same characters and relationships over into...cocaine trafficking.

Thompson told the site that the change came about because writer Adam Reed felt as though the show was getting repetitive, and wanted to freshen it up.

"Our ratings have gone up every year. FX is really happy with us. And so you have a show that is successful and/or becoming more successful and we decided to change everything because we were bored and because we just want to make the show that makes us interested and happy in the end," Thompson said. "And when we presented FX with this idea we were like, 'I hope you don’t hate us but we want to change everything.' And they were coolly like, 'OK great. Sounds awesome.' And we’re like, 'OK,' which kind of weirded us out because you know you don’t just like change a show in the middle of it."

So, how does the whole drug dealer part figure into the ongoing story of ISIS, the little spy agency that mostly couldn't?

"What’s happening is you’re going to see in the very first episode of this season that all these years that Malory’s in control of ISIS, and they’ve been doing all these covert operations — kind of like the CIA or whatever — that that was never legal," Thompson explained. "She was just contracting out this stuff, kind of like Black Water or whatever, and in the first episode of the season the government comes in and shuts them down, throws them all in jail. Like, 'What the f*ck you guys doing? You’re not allowed to do this. Stop doing this immediately. You’re assassinating people. You’re all going to jail.'"

When the gang gets out of jail, though, they realize that while their facility has been confiscated and their jobs no longer exist, they do have a ton of evidence that they've gathered up over the years--including enough cocaine to make them all incredibly rich.

"We are now a f*cking drug cartel," the producer continued. "And so it goes from there and as you might expect they are not so successful at selling one ton of cocaine. We end up for a large part of the time in Colombia, then a fictional nation, then another fictional nation in Latin America, just trying to sell cocaine to people, whatever. I think it’s a little bit of Breaking Bad and a little bit of us just trying to keep the same relationships that we have, which is still basically the same characters with the same relationships. Except Malory kind of becomes untethered because she’s no longer necessarily theboss. They’re all kind of in this together as drug partners. And then it’s just seeing what happens as they try and sell this literal one ton of cocaine."

All except Cheryl, of course. She's a filthy-rich heiress already and never truly needed the job at ISIS. So, of course, they decided the obvious thing to do would be to set her up as an aspiring country-music star, complete with a real-live album being produced by a friend of the show and performed by a singer who sounds a bit like voice actress Judy Greer, who plays Cheryl.

"So she is now 'Cherlene,'" Thompson said of the character, who has changed her name more than once over the life of the series already. "She’s on the road. She’s doing country songs, and we’re actually putting out a country album with the show this year. Not a joke. A country album. We’re doing 'Danger Zone' as a country song. We’re doing 'Eastbound & Down,' like from Smokey and the Bandit. There’s a big Smokey and the Bandit episode coming where they have to get Cherlene to the concert in Texas and Archer’s in his f*cking TransAm Blocker car and we’re playing 'Eastbound and Down' and Cherlene’s singing. It’s pretty great."

Archer's Next Season Will Feature The Spies Reimagined as Cocaine Dealers