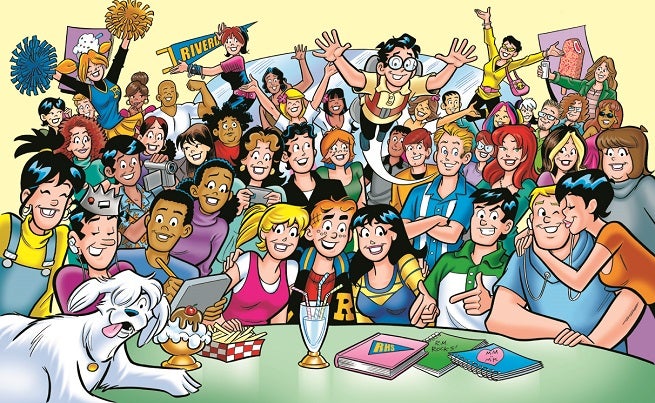 Next year, Greg Berlanti will not only have Arrow, The Flash and Supergirl on his resume, but another comic book property as well: Riverdale.

The producer has set up the Archie Comics-based drama at Fox, Deadline reports.

The report indicates that we'll see a number of Riverdale favorites on the small screen, as the series will feature Archie, Betty and Veronica, Josie and the Pussycats.

In the comics, Betty and Veronica are actually taking some time out to swap places with exchange students, leaving Riverdale behind, so this may be the only spot to see the whole gang together for a while.

Don't expect it to be a totally straight retelling of classic Archie tales, though; the pilot was written by Afterlife With Archie and Chilling Adventures of Sabrina's Roberto Aguirre-Sacasa, the Chief Creative Officer of Archie Comics.

"Riverdale is named after the fictional town where most Archie Comics characters reside and which will serve as the setting for the show. Set in the present, the series offers a bold, subversive take on Archie, Betty, Veronica, and their friends, exploring the surreality of small-town life…the darkness and weirdness bubbling beneath Riverdale's wholesome façade.

"The series will showcase the eternal love triangle of Archie Andrews, girl-next-door Betty Cooper, and rich socialite Veronica Lodge, and will include the entire cast of characters from the comic books—including Archie's rival, Reggie Mantle, and slacker best friend, Jughead Jones. Popular gay character Kevin Keller will also play a pivotal role, with other characters from Archie Comics' expansive library also slated to appear, including Josie and the Pussycats."

Aguirre-Sacasa has previous experience writing for Glee, a series that crossed over into Archie Comics. Berlanti has a long track record with teen dramas like Dawson's Creek and Jack and Bobby. Rumors have been circulating for about a year that an Afterlife With Archie series could be in development.