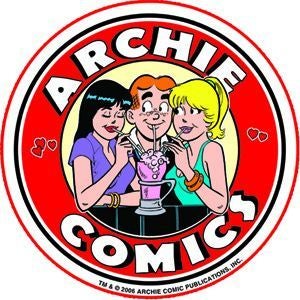 The 2012 San Diego Comic-Con Archie panel featured a very strong list of Archie Comics heavyweights, with Jon Goldwater, Archie Comics Co-CEO, co-CEO Nancy Silberkleit, president Mike Pellerito, editor-in-chief Victor Gorelick, cartoonist Dan Parent, writer Michael Uslan, iVerse Medio CEO Michael Murphey, MoonScoop Entertainment's Mike Young, producers Don Murphy, writer Alex Segura, and writer Roberto Aguirre-Sacasa. Archie announced a Veronica and Betty line of cosmetics in conjunction with MAC Cosmetics.  Archie will also be part of a very well-known television series with Archie Meets Glee.  Roberto Aguirre-Sacasa spoke about the project.  "I have been a life-long comic book fan, and I am so excited to be a part of this.  When I first met John and Nancy, I showed them pictures of me dressed as Archie as a child.  I've wanted to do something with Archie for awhile, and I started writing on Glee a few months earlier, and I joked in the Glee writers room about how a lot of the show had archetypes to the characters in Archie and his books and characters.  I went to Ryan Murphy and proposed the idea of Archie meeting Glee and he loved the idea." Another big announcement that came was the 2013 release of a cross-over of Sonic and Mega Man, two characters that have not appeared together before.  The idea came about after a lot of discussion over who could cross over with each other.  The Sabrina, the Teenage Witch film was discussed as well, and Don Murphy spoke about that. "We really want this character to be a franchise character.  This will not just be a one and done movie. We really want to explore her origin more.  Where are her parents?  What happened to them?  She still has her two aunts, but what about the rest of her origin?  We talked to over thirty different screenwriters about what they would do with that character.  We didn't want to go the route of the sitcom, so we had to make that very clear to anyone who was developing that film.  I hope that at next year's convention we can do more discussion about casting and such, but right now we're excited that it is moving forward."   A short clip was then shown from the new Sabrina the Teenage Witch animated series.  Mike Young said that they couldn't share yet which networks had picked up the series for release, but it will be American based with an international release. "We wanted to push the show more towards the Buffy end of the scale.  She lives in both worlds, the supernatural and Earth, and she has her two aunts.  The art development with this show, it's CGI, is very fresh and we think it will be one of the big shows for next year."  Another series based on Archie in junior high was teased, but no official announcements on that at this time. In more exciting geeks of all kinds news, Kevin Keller will be doing a crossover with special guest star George Takei!  Takei himself was excited about being part of the project, according to Dan Parent.  Another new Archie crossover, Archie Meets Kiss, will be coming out this November. It will see the Riverdale gang, zombies, the supernatural and much more!   More discussion about future issues about Kevin Keller and his own series showcasing his married life is also on the way.  Another big piece that was announced was a tragedy coming to Riverdale in the pages of Life With Archie.  Judging from the cover art for it, it looks like a violent death could be on the way in this futuristic setting for Archie! Lots of enthusiasm was present from the crowd overall all the new aspects of the title New Crusaders, which is developing new digital, app based features to go along with its printed material.  The panel as a whole gave a lot of insight into what one of the country's most beloved and nostalgic staples is going as it moves forward.