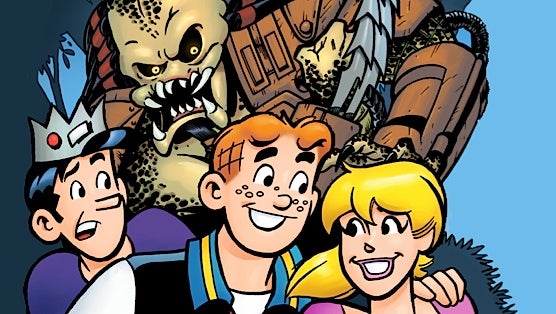 Every once in a while an idea comes along that inspires two opposing, but concurrent thoughts. They are ideas that seem simultaneously brilliant and idiotic, insightful and deranged, clever and banal. It's the sort of clash that makes the right and left hemispheres of your brain put on boxing gloves, because there's no good way to properly identify the idea--at least until you see it in action. Archie Versus Predator is just that sort of idea, and the first issue is a round one knockout. The winner is whichever side of your brain thought Predator stalking and murdering a bunch of Riverdale's cherished comics icons was a stroke of genius.

It takes a special blend of humor, feistiness, and raw talent to make an idea like this work, and that's a mix writer Alex de Campi and artist Fernando Ruiz perfectly capture together. De Campi has shown her willingness to push boundaries and take risks on comics like the upcoming No Mercy and Grindhouse. She's a fearless writer, taking hate mail and shredding it onto her breakfast cereal each morning for flavor. That kind of attitude is required for combining such a disparate pairing of American pop culture icons. Ruiz and inker Rich Kolowski know the territory the De Campi wants to explore, and bring her script to life in a way that could fool unwary readers into thinking that Archie was canonically killing their top character. It's the sort of creative pairing that will instantly set expectations for those in the know, and make new believers of those unfamiliar with their work.

The tone that De Campi, Ruiz, and their collaborators strike is shocking in its simplicity. Unlike recent alternative Archie tales like Afterlife with Archie and Sabrina the Teenage Witch, Archie Versus Predator embraces the tone and the style of its source material. It is not difficult to imagine editing certain panels (those containing aliens, blood, and human skeletons to start) in order to convert this first issue into a nicely done single issue of Archie Comics. Predator adds a lot to the fun of this issue, but many readers may be surprised to find that there is already plenty of fun to be had with the kids from Riverdale without gruesome eviscerations and decapitations.

The story begins when Jughead wins a Caribbean vacation for the entire gang. It's on the island that a Predator finds and follows them back to Riverdale, but the story's main thrust comes from their adventures together. An impromptu fashion show serves as a centerpiece to the issue, and its an absolute delight to read.

Everything about the fashion show is big and obvious, but that's the intent. The characters in Archie Comics are cultural icons that can be seen in almost every drama or comedy set near a high school. They are fundamentally accessible, and De Campi has a clear understanding of each character's core. She provides plenty of moments for these classic characters and relationships to shine. There are instances of irony and social commentary, but much of the script allows everyone to simply exist as they have in digest-format for decades. Even if you remove the Predator appearances that add a foreboding, creepy tone over event's silliness, this would still be a really fun comic.

And Ruiz and Kolowski understand these characters just as clearly as De Campi. There is a certain look that defines not only classic characters like Jughead and Veronica, but the settings and expressions associated with them. The fashion show highlights the world's bold, bright style with colors by Jason Millet that light up the page like a Crayola variety pack. Each setting is clearly established in an initial panel, with bright blue water and lush palm trees defining the tropical beaches. Their use of an established style is not a weakness. It reveals an understanding of these characters' forms, and why they've been effective for so long.

Part of that effectiveness comes from the efficiency of Archie Comics' storytelling. At one point, Betty takes a jungle detour that leads her through a mysterious temple in the course of a single page. The visual storytelling on display is masterful in its simplicity and effectiveness. While Archie Versus Predator is limited to a four-issue mini-series, there's little concern that it will run out of space. The first issue alone packs an incredible amount of jokes, Easter eggs (be sure to look out for characters at Hutch's Bar), and plot into 22 pages. It even leaves room for a Sabrina backup feature that features another team-up with one of the greatest characters to ever be published at Dark Horse Comics.

As successful as the style and tone of Archie Comics remain, De Campi and Ruiz's darkness adds a significant draw. De Campi laces the comic with jokes that some minors (and adults) might miss. But for those that their time with the material, they will be rewarded. Even more exciting is Ruiz's take on the Predator. He tackles the Predator's perspective just like the first Predator film does, providing visual points of reference, but keeping the monster quiet. He has adjusted the Predator's sight display with one of the funniest gags in the comic, and shows a brief flare for the gore that follows the monster's trail. The first interaction between the Predator and Riverdale gang is so shocking, it elicits gasps and laughter in a very awkward display of facial gymnastics.

If you're still wondering whether the editors at Dark Horse and Archie Comics lost their minds teaming up for this series, stop. This is an idea that only seems crazy until you read the results. Archie Versus Predator #1 is a comic that only captures what makes these franchises great, but also creates a special world where they unite to make one of 2015's funnest comics.

In case you missed it, check out ComicBook.com's interview with writer Alex DeCampi.