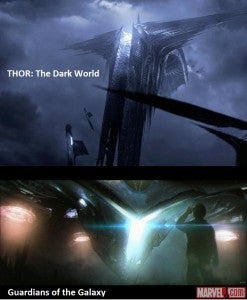 Earlier this week, the new issue of Empire Magazine hit, and with it, a whole bunch of new photos from Thor: The Dark World.

One image in particular, the one at right and top, struck me as familiar when I saw it: the image of the alien spacecraft with a curved underside and a lighted area at front that was shaped a bit like Boba Fett's visor. It felt very similar to the image seen directly below it at right--a promotional image from Guardians of the Galaxy that debuted around the time of the Marvel Cinematic Universe Phase One box set.

This is speculation, here, so try to take it as such. And, no, I'm not saying it's the same craft. I'm not blind.

It feels to me as though there's a very similar design aesthetic going on here. I mean, obviously it's not the same ship, but given the fact that the scene depicted at bottom happened something like 25 years ago, it's distinctly possible the ship's design could have been modified since then.

Could there be a connection?

Are Aliens from Thor: The Dark World Recurring in Guardians of the Galaxy?