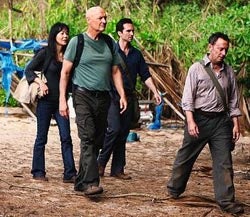 Last night's episode of Lost was a doozy, and frankly, it left us a little, well, dizzy. So many new revelations and questions made it easy to become confused. We're here to walk you through it. We sure don't know ALL the answers, but we can try to make things a little more clear for you. What was the deal with Locke instructing Richard Alpert to help a time-skipping Locke? If you'll recall, earlier this season, the Losties were flashing from time period to time period. Juliet, Sawyer, and company were in one spot on the island. Locke was by himself somewhere else. Everyone flashed together to the same time periods, but they were in different physical locations on the island. One of the jumps in time takes them to 2008. This is where Locke has been shot, and Richard patches him up. Locke flashes after Richard takes care of him. Eventually he meets up with Sawyer, Juliet and crew. Locke goes down the well, turns the wheel. The island stops blinking, and the Losties end up in 1974. They join Dharma to survive. Locke, meanwhile, is off the island--in 2005--being rescued by Whitmore. Three years pass. Locke attempts to convince the Oceanic Six to come back to the island. Ben kills Locke. Sawyer and crew spend those three years in the Dharma Initiative. Now it's 2008 and the Oceanic Six return to the island. Locke comes back to life. Locke, Ben, and Sun are on the island in present time--2008. We still don't know why Sun and Locke--original passengers of Flight 815--were separated from their fellow passengers. Jack, Kate, Hurley, and Sayid end up in 1977. A now confident Locke is completely in tune with the island. So much, it seems, that the island 'tells him' what he needs to do. We don't know HOW the island tells Locke anything, but we somehow believe this is true. Locke realizes that HE was the reason that Richard showed up to help him in the jungle, so he must take Richard to the place where Richard will 'pop' into shortly. So we have 2005 Locke bleeding in 2008. Richard didn't flash, so he's in 2008. He goes over, heals 2005 Locke, and Locke flashes again to meet up with his friends. Got it? Who the heck--and what the heck--is Richard Alpert? We've seen Richard over a multi-decade span, and he's the same each time. He doesn't age. So we assume that he's immortal. However, a couple of things from this episode stand out. One, Richard raised his arms when Daniel pointed the gun at him. If Richard can't be killed, why does he care if someone is waving a gun at him? Two, when Richard had to go underwater to reach the hydrogen bomb, he held his breath. Again, he must be able to die. Also, as an'advisor' that has been around for a long time, we've seen that Richard knows just about everything that is going on. He's almost like the island's caretaker. Yet, he didn't know that Locke died. And he was extremely flustered when Locke ordered him to take everyone to see Jacob. Could it be that Richard is just a pawn? Maybe he's just the Island's (or Jacob's) stooge that has been allowed to live forever. Who exactly is Jacob, and why does Locke want to kill him? It's always appeared that Jacob was the Island--or that he controlled it. But that isn't so. The island told Locke to kill Jacob, so they aren't one and the same. We've seen shadows of Jacob locked in a cabin, as if he's been in a very long timeout. Yet Jacob has SOME power. But over who? Jack Shepard? Claire? Richard? Ben? Maybe we've had this wrong the entire time. It isn't about Ben vs Whitmore. It's about the Island vs Jacob. That is the battle we'll see, and the lines are being drawn right now. We know that Locke is definitely on the island's side. Richard and Ben (even though Jacob kicked him off) appear to be Jacob people. Whitmore and his 'what lies in the shadow of the statue' people are island people. Could it be that Whitmore warred with Jacob and was booted as a result? Maybe Whitmore is the GOOD guy in all of this. It looks like, for now, that it's shaping up to be Island/Whitmore/Locke vs Jacob/Ben/Richard. The question is, where does everyone else fit in the equation? Locke has never had full backing by his fellow passengers--will they stick by his side in this ultimate battle? What about the Others? Are they shoo-ins for Jacob's side? Is that why Locke is taking all of them to see Jacob--so he can swing them around to his way of thinking? I'm guessing we'll know a lot of these answers next week in the finale.