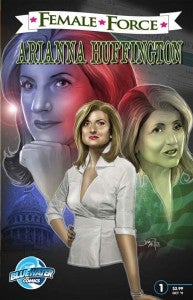 Bluewater Comics has announced that they will be doing a bio comic featuring writer and author Arianna Huffington. This isn't the first time that Bluewater has done a comic book featuring someone famous in the tech community, as both Mark Zuckerberg and Steve Jobs have been featured in previous comic books. One can only wonder if TechCrunch founder Michael Arrington will be next. According to Bluewater Comics, Female Force: Arianna Huffington will tell the story of "how a woman from Greece has become one of the most talked about media personalities in the world." Huffington has been well-known in the political world since the nineties, but with the Huffington Post, she made her mark on the Internet world. The Arianna Huffington comic book is written by Martin Pierro with art by Nick Justus. The comic will cover everything from her time studying in England to her marriage to a congressman to her run as governor of California and to her selling the Huffington Post to AOL for $315 million. Here are the quotes about the comic from Bluewater. "The great thing about the 'Female Force' series is we can examine the lives of anyone," said Darren G. Davis, who is president of Bluewater Comics. "Arianna Huffington is a unique personality. She is a woman who has reinvented herself when it was required and she still comes out on top." "I took all of the facts I had at my disposal and tried to work them into a narrative that flows, and though her story is far from over, I feel I gave the comic a clear beginning, middle and ending," said writer Martin Pierro. "I'm excited to finally get the book out there to see what people think." "For the past couple of months I've literally lived and breathed, Arianna Huffington," said artist Nick Justus. "In drawing, 'Female Force: Arianna Huffington,' the research was essential and fascinating and I think it shows in the finished product." "The other aspect of her life I admire is that she challenges both sides of the political aisle," said Davis. "And to read her story is to understand she is a remarkable woman." "I enjoyed learning so much about this true entrepreneur and driving force in the political arena," said Justus. "She's led a very eclectic and rewarding life." Female Force: Arianna Huffington will be thirty-two pages with a cover by artist Joe Phillips. The comic is scheduled to be released in comic book stores in October 2011.