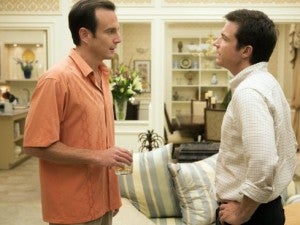 The first officially-released still photograph and episode information about the upcoming fourth season of Arrested Development, which will launch on Netflix in May, emerged today in a USA Today article discussing the streaming-video provider's presentation at the Television Critics Association.

In addition to confirming previous reports that the series would go live in May, series creator Mitchell Hurwitz revealed that only Michael Bluth would appear in every episode, and that the rest of the family would never all be in one place, at one time.

"The show will look very different… [a]very, very complex puzzle… we’re not jumping from one thing to another; you’re staying with one character… the family has fallen apart at the start of our show. They all went their own way, without Michael holding them together, so they’re left to their own devices, and they’re not the most successful devices.

"[We show] what happens in 2006 as the Bluths fled from the law on the Queen Mary…  the moment you saw in one show will reappear in another show from a different character’s perspective… If people watch it all at once, it will seem like a giant Arrested Development. It’s really tailored for Netflix."

While that might sound like Hurwitz's long-planned Arrested Development movie got out of hand and became a TV series, it's apparently quite the contrary; Hurwitz says that the show might still lead into a feature film, and is structured to do so. What that means for more new episodes, if Netflix should wish to order them, is unclear.

In the interview, Hurwitz also revealed that actor Michael Cera, who plays George Michael Bluth on the series, joined the writing staff for season four.