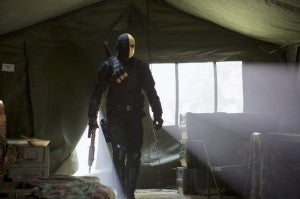 Last night, The CW released a preview for next week's episode of Arrow, titled "Damaged." The episode, which will delve into more of what happened on the island while Oliver was stranded, will feature fan-favorite DC Comics villain Deathstroke the Terminator.

Eddie Fyers, a spy and hitman who had first an adversarial relationship with Oliver Queen, then went on to become one of his closest friends and allies in the comics, will also be featured in the story, as well as John Barrowman as the mysterious "well-dressed man." Will we finally learn who he is? It seems odd if we don't, now that he's on camera and all.

Arrow: A Preview of Next Week's "Damaged"