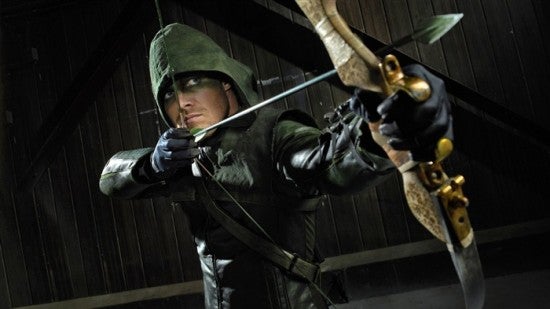 Shortly before the release of Marvel's The Avengers, Wired Magazine released an article critical of Jeremy Renner. Well, more specifically, critical of his archery form. A professional archery coach took a look at all the available footage from the film and determined that the special needs of filming archery in a superhero film hadn't been well-served by Renner from a technical point of view. ComicBook.com mentioned this article at the time, and it seemed that Marvel had a little fun with it, too, as early covers for Matt Fraction and David Aja's Eisner-winning Hawkeye monthly featured covers that were mock-ups of instructional posters. One of those posters, in fact, seems to be a real poster that exists in the world (you know--minus the Hawkeye part), as Carla Companion, a New Hampshire-based archery coach (and beer blogger) and friend of the site, noted that she's pretty sure she owns the original somewhere. Around the time Renner was taking his lumps, it was explained that he had a difficult time simulating good form because the arrows were almost never in his hand, and sometimes even the bowstring was digital, for safety reasons. That's because its dangerous to shoot off an arrow in a crowded set, as Arrow star Stephen Amell explains in the interview below.

"It's very, very dangerous to shoot a bow and arrow on set," Amell explained (for those who don't have YouTube or can't load up the video at work). "Even if you put a rubber tip on the arrow, it can still pierce your skin, or at least it wouldn't feel great." Of course, you can see where this is going. With Arrow wowing comic book fans this season and besting its own ratings record week after week, it seemed as good a time as any to ask Companion to take a quick look at Amell's form, to evaluate it and see what she thought. It was worth a look, if for no other reason than that Amell seems concerned with looking and feeling right. Renner appeared to address Wired's criticism on the red carpet of The Avengers premiere in Los Angeles. He was very dismissive of his supposed archery training, saying that he took a few lessons but stopped soon when he found that it was not helping him. He also suggested that, being a superhero, fans would likely take as an article of faith that Hawkeye was a good archer, even if he didn't look it. "That's me with the form and everything," Amell elaborated on his archery point in the interview above. "Occasionally I'll shoot and I've gotten very good; I practice on the weekends--but not, it's almost always CGI." So could we expect some of those same awkward poses and the like from Amell that were spotted on Renner, since both are working with digital "arrows," or does the Arrow star's hands-on archery practice actually help him be more convincing? "So I think I picked the wrong episode of Arrow to watch," our coach said after logging into Netflix and picking one at random from the show's first season. "Zero archery thus far." 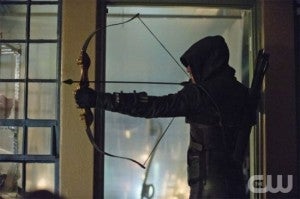 She recognized John Barrowman (Malcolm Merlyn), though, so we knew the chances were good there'd be at least one good fight scene in the episode. After watching through that episode and then skipping to the finale to get a better sense for a longer-form archery duel on the show, Companion delivered her verdict: "The only thing I see wrong is that he keeps it drawn forever, with ease, while facing someone else at gunpoint," she reported back. "To have the killing power that the bow must have, that would be incredibly difficult to do." She added, "His form otherwise is great, actually." She was a bit more critical of Merlyn himself--not much, but there are some things that even the suspension of disbelief can't totally explain away. In the season one finale, during the big battle between Arrow, Merlyn and every random person in Starling City who happens to stumble across their path, Merlyn was quick on the draw--a little too quick, as it turns out. "Good form overall. The only thing I am not beliveing in the finale is the speed at which [Malcolm Merlyn] is loading his bows, but that's just movie stretching," she explained. "It's completely possible to fire that many with [Oliver Queen's] bow." By way of illustration, she provided us with a non-Hollywood video of somebody doing just that, which you can see below.

Asked whether the uncanny quickness of a member of the League of Assassins might explain away Merlyn's smooth moves, Companion said that, in fact, it wasn't Merlyn she was concerned with--but the bow itself. "The only objection I have is that to shoot a compound bow, you have to go from full draw to full slack, you can't do what speed shooters do which is to fire and start to re-draw before the draw cycle ends," she said. "It's a mechanical issue." That's not too too bad a score, then. Wonder how this weekend's The Hunger Games: Catching Fire will fare?