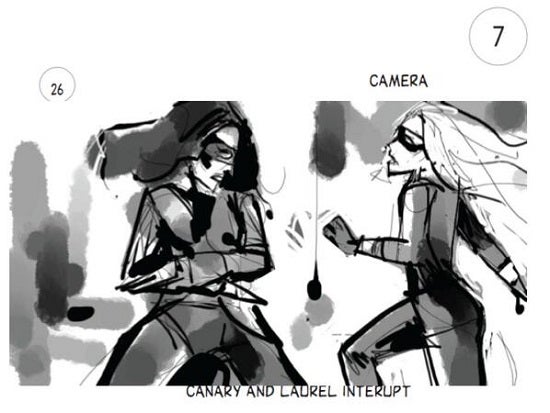 Jessica de Gouw and Jeffrey Nordling will return to Arrow in three weeks for "Birds of Prey," reuniting DC's all-girl, street-level super-team for the first time in live-action since their short-lived CW TV series. That series, which starred onetime Arrow casting candidate Ashley Scott (she almost played Kate Spencer), ran in 2002 and 2003 and featured The Huntress (played on Arrow by de Gouw), Black Canary (played on Arrow by Caity Lotz) and Oracle, a character who has not yet been introduced on Arrow but with whom Felicity Smoak shares a number of characteristics. "She plays a role, but not in the way you're hoping," said Arrow executive producer Marc Guggenheim when asked whether this episode will see Felicity step up with the Birds. "Hopefully we'll get there–that occurred to us as well but we didn't have an opportunity to do that in [Episode] 17." WHEN THE HUNTRESS MET THE CANARY — When Frank Bertinelli (guest star Jeffrey Nordling) is arrested, Oliver (Stephen Amell) knows it's only a matter of time before his daughter, Helena, AKA The Huntress (guest star Jessica De Gouw), returns to town. To make matters worse, Laurel (Katie Cassidy) is picked to try Frank's case, putting her right in the path of Helena. Oliver tells Sara (Caity Lotz) he will handle his ex-girlfriend, but when Helena takes hostages at the courthouse, including Laurel, the Canary will stop at nothing to save her sister. When The Huntress and Canary meet, an epic battle begins. Meanwhile, Roy (Colton Haynes) realizes he needs to keep Thea (Willa Holland) safe, but doesn't like the way he is forced to go about it. John Behring directed the episode written by Mark Bemesderfer & A.C. Bradley.