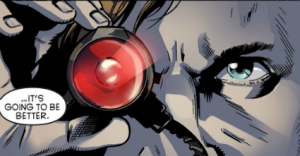 executive producer Marc Guggenheim tweeted a message out to viewers earlier this week: If you want to know how Deadshot managed to survive his first appearance on the show, when he seemed to have been killed, and ended up on your TV half a season later, you should check out Arrow #22.

There's no great conspiracy at play in terms of how he survived the arrow to the skull delivered from Oliver Queen--he really just kind of stands up and stops being dead--but what happens next, and how he ends up "upgraded" is where you get into the stuff that's driving more of the action and that's likely to have longer-term ramifications on the show.

Arrow's comic book tie-in is an interesting experiment; rather than other TV series tie-ins like Smallville Season Eleven, Buffy Season Eight or the upcoming X-Files Season Ten,  it's being published at the same time as, and weaving in and out of the continuity of, the show's story. So don't be surprised to see more of this in the future...

Arrow: Deadshot's Return From the "Dead" Explained in Comics