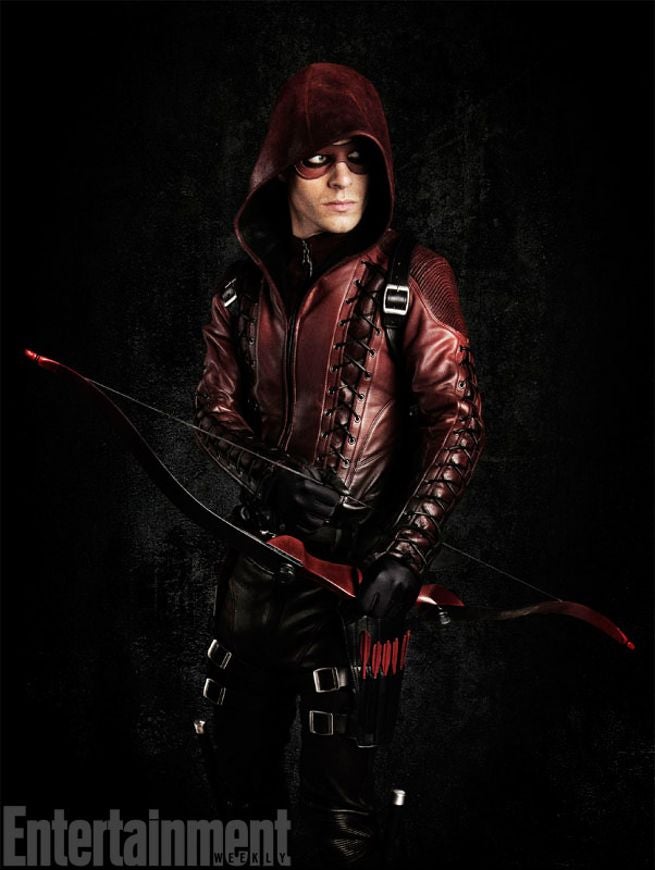 Warning: Spoilers ahead for tonight's episode of Arrow, titled "The Secret Origin of Felicity Smoak."

Tonight's episode of Arrow ended in shocking, dramatic fashion as Roy Harper, better known as Arsenal, woke from a nightmare which seemingly indicated he was the one who killed Sara Lance in the Season Premiere this year.

But we're not buying it.

There was never any fallout from Roy, under the influence of Mirakuru, killing a police officer last season. Yes, yes, it wasn't his fault and we all remember from Hal Jordan's return that "I wasn't in my right mind" is apparently a Get Out of Jail Free card in the DC Universe. Still...it seems producers at the time promised some kind of impact from all that.

And maybe this is it. Did they even ever tell Roy? They didn't do it in the Season Finale last year and I don't recall that being a conversation in Season Three. If it happened, then, it would have been in Arrow Season 2.5. Either way, whether he knows or not, he could easily be wracked with guilt (consciously or subconsciously) over having killed an innocent, and projecting that insecurity onto the currently-unsolved mystery in their lives.

He doesn't have powers anymore

This could tie into our first point, actually: Roy Harper doesn't have powers anymore. It would be very, very difficult for him to throw arrows into her at short range even if he could somehow have aim so true. The strength required would be very significant.

Here's an interesting article that puts together some information intended for hunters about draw strength, speed, weight of the arrows and a number of other factors that contribute to a successful hunt. Somebody throwing what look like pretty light arrows, by hand, at close range, would likely not have enough velocity to penetrate Sara's leather jacket and kill her.

Of course, I'm a layman here. Anybody with more weapons experience than I have, please feel free to correct me in the comments.

Too many villains could do this

There is absolutely no "beyond a reasonable doubt" in this situation. DC Comics is full of villains who have the capability to make you see things.

Hell, even Vertigo, who appeared in the Season Premiere (where Sara died), had a new drug whose entire effect was showing you your worst fears in startlingly-real detail.

Probably the most compelling argument in favor of Roy actually being the killer is that killer-Roy in the dream and Sara exchange the same dialogue as Sara actually did exchange with her killer...but that, too, could be a planted suggestion if there were a villain who could persuade Roy to see what s/he wanted him to.

While Arrow can play fast and loose with the comics mythology, that's mostly as it pertains to characters who have a fairly minor role in the overall legend. Even a character like Black Canary is becoming more recognizable as her comics-self as the series rolls on.

But Roy Harper? Well, there's no clever way to say "Ah! You see? There was another one..." like they did with the Lances. We've heard his name, we know who he is...and it would be nearly impossible to make him a villain, or utterly insane, without alienating a chunk of fandom.

From interviews with the showrunners, I've had the impression that the mystery of Sara's death is going to be something that drives the first half of the season -- and there are still another few weeks left before the fall finale on December 9.

Giving us Roy on a silver platter this early would be an odd creative choice -- although Arrow does like to get the plot moving faster than most shows, so...who knows on this one.