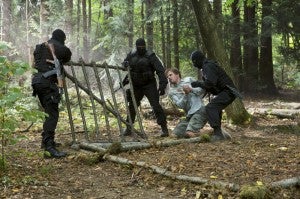 Alright, so Kate Spencer doesn't get the full-name treatment, but rumor had it a while back that Ashley Scott from Birds of Prey was coming to Arrow to play the DA-turned-vigilante crimefighter. And the female DA in this episode is called "Spencer" a bunch of times. So you draw your own conclusions. The episode opens on the island, where Oliver isn't comfortable handling the dead animals he and Yao Fei are hunting. He asks instead to take over the bow. Yao Fei hands it over to him, but Ollie's first shot--aimed at a tree--goes wild and into the trees, where Yao Fei tells him to go recover it. When he goes there, Oliver is assaulted by a group of masked men who throw him into a cage in a pit. Back in the present, Detective Lance interrogates Oliver, who denies being Arrow. Moira Queen interrupts the interrogation, bursting in and terminating the questioning. Oliver demands Laurel as a lawyer, or he'll represent himself. Moira heads to Laurel's office--Laurel hesitates, on the grounds that she's been in a relationship with Oliver before and that her father is the arresting officer. Moira says she understands and leaves. But during opening arguments at the trial, Laurel bursts in and gets Oliver bailed, and confined to home with an ankle monitor. At home, Oliver announces a prison-themed party, saying he wants to put on a brave face. Back at her place, Laurel confronts her father, saying in part, "You hate the Hood and you hate Oliver and you want more than anything for them to be the same person." She tries to convince her father that Oliver didn't hire her to mess with him, but to get through to him. Oliver calls Diggle, then, and reveals he got caught on purpose--he knew the security camera that caught him was there. His plan, basically, was to get himself exonerated of being Green Arrow because he knew that, logically, the timing of their arrivals in the city would be noticed sooner or later. To that end, he asks Diggle to keep an eye on a German arms dealer. When asked how to do that, his response is "You know us billionaire vigilantes. We do love our toys." Diggle heads off to the warehouse where Green Arrow's base has been set up, and he's suitably impressed. At Queen, Steele calls in his head of security, telling him that he's found the yacht and needs it transported to a more secure location while he figures out what's going on. District Attorney Spencer offers Oliver an insanity plea, saying essentially that she believes he is Arrow but that it's probably PTSD-related after having spent the years on the island. Oliver rejects the deal and demands a polygraph. Told that it wasn't admissible in court, he says that he wants to take one anyway, to convince Detective Lance. Laurel at first objects, and pulls him aside, but he convinces her, promising that if he fails the test he'll consider the plea deal. 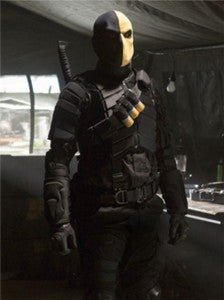 Flashing back to the island, Oliver is brought by the masked men into a tent where Eddie Fyers--a glad-handing Brit whose icy, friendly means of interrogation feels a bit like the way The Governor is being played on The Walking Dead. At first, Oliver offers him a substantial reward for rescuing him home but quickly it becomes apparent he's got another agenda when Eddie shows him a photo of Yao Fei--here, clean-cut and wearing a military uniform of some kind--and asks if Oliver knows him. When Oliver says no, Fyers quickly becomes far less kind, leaving him in the hands of Deathstroke (who, at this point, still has two eyes, comic fans!). In the present, Oliver tries to convince Thea that he's not Arrow. It's a difficult slog, as she's got the arrowhead he brought her back from the island, which he saves by assuring her that it's something he bought at the airport. Elsewhere, Moira approaches John Barrowman's "well-dressed man" and the two have evil musings. Oliver takes the polygraph back at the police station, flashing back to Deathstroke torturing him intermittently. When pressed about his scars, he admits that he wasn't actually alone on the island, that he was tortured and that he has killed before. He also denies being Arrow, and denies being at the location where one of Arrow's busts had gone down. The polygraph operator believes him, but Detective Lance still does not. Cut to the party, where Oliver pulls Diggle aside, explaining that he needs him to go be Arrow at the arms deal in order to convince the police that Ollie isn't the guy. Diggle, angry at being misled, tells Oliver not to lie to him again, but agrees to help him. Ollie says that he never planned to put Diggle in danger--that he didn't expect an arms deal to be going down at the same time as his staged apprehension. 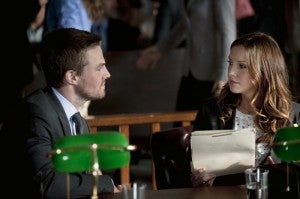 Back at Queen, Steele learns that his head of security has been killed in a car accident en route to the yacht. Laurel shows up and pulls Ollie aside; they head to his room (and she makes the "fishnets" joke that will likely get a laugh from comic book fans) and tells him that she was so wrapped up in all the terrible things that happened to her family that she never considered how hard the island had been for Oliver. She asks to see his scars, which he shows her. She asks how he survived it, and he implies that it was a desire to see her that kept him alive. They kiss, and she bolts. Back on the island, Fyers gives up on extracting information from Ollie and tells Deathstroke to kill him. At the last second, though, Yao Fei springs in to the rescue, taking out a few guards and having a brief, brutal altercation with Deathstroke. In the moment he's got Deathstroke stunned at the end, he grabs Ollie and absconds to a cave, where he leaves Oliver, dropping a boulder in front of the door so that Ollie can't try to come help while he chases off the bad guys. In the present, the Germans are meeting with a group of gangsters, when Diggle shows up in the hood to stop it. All goes well, but the Germans escape. Steele calls Moira into his office, telling her that he had found the yacht and explaining that the head of security had been killed looking into it for him. She asks him to back off when he wants to know what else his wife may have been lying to him about. Oliver gets the call from Diggle that things had gone well, and starts to head back to the party--but is set upon by a gunman dressed as a waiter. The two scuffle for a while, and as the gunman is about to fire at Ollie, he's taken out from behind by Detective Lance, who came running upstairs when Oliver's ankle bracelet was deactivated in the fight. Shortly thereafter, with the grounds cleared, they release Oliver on the grounds that Arrow had been spotted elsewhere while Ollie had an alibi. Moira, furious that the arrest had created the impression Ollie could be Arrow and therefore a target, tells Lance to leave. Oliver thanks him for saving his life. Moira then confronts John Barrowman, accusing him of trying to kill Ollie. He admits as much, apologizing but saying that he thought he was targeting Arrow. She tells him that if any of her family is harmed, she'll destroy him, and storms out. Back at home, Oliver is met by Laurel, who tells him that she's concerned about his polygraph results; there's an indication that he may have lied on the question as to whether he'd been at the scene of one of Arrow's attacks, where the pair had gone together on a school field trip once. If he lied on that, then he could have on the others, she says. She adds that whatever attraction exists, "Nothing can ever happen between us." And finally, just before we see another quick, effective takedown of the arms dealers by Arrow, Diggle gets a monologue about how hard it is to lie to the ones you love, running over images of Thea looking suspiciously at the arrowhead, Laurel bringing her drunk father home from a bar and Steele leaving Moira. Ollie explains that lying to his family hurts him more than anyone else.