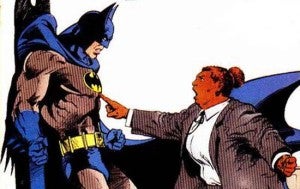 After rumors broke out this morning that The CW's Arrow would be casting Amanda Waller to appear in an upcoming episode, Green Arrow TV has confirmed that she will appear, although official Warner Bros. sources declined to confirm any of the other details offered in the original report. Pamela Grier played the character in Smallville and Angela Bassett in the Green Lantern movie, which marked a departure from the characters' longtime look as a heavyset and physically-imposing woman. The TV and film look has since been adopted in the comics, to the dismay of many fans. In Smallville and on the Justice League cartoons, Waller worked with Checkmate--while in Arrow, she's reportedly going to be working with A.R.G.U.S., an organization that Geoff Johns is using quite a bit in Justice League comics right now. Waller also led the Suicide Squad for years--a group of supervillains captured and forced to work as a strike force for the government. Whether we might see that team (some of its frequent members including Count Vertigo and Deadshot have appeared on Arrow in the past) isn't clear either.

Paul Heyman Explains the Importance Behind Brock Lesnar vs. Bobby Lashley at the WWE Royal Rumble

New Film Studio To Be Built In Space