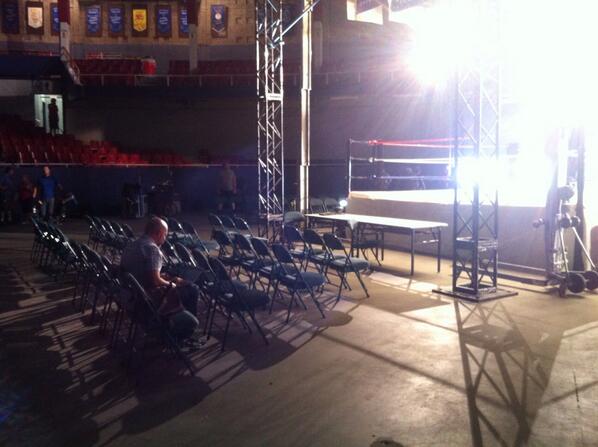 A tweet made last night from Arrow Executive Producer Marc Guggenheim has a number of fans wondering whether Ted "Wildcat" Grant or Rocky Davis of the Challengers of the Unknown might appear in the Season Three premiere of the hit CW series.

Depicting what appears to be a wrestling ring, Guggenheim gave little guidance other than to say he was "on set," but that was enough to get fan reactions going on social media.

While on Twitter the overwhelming response was to suggest Wildcat, a championship boxer who played a role in training Batman (at least in the post-Crisis on Infinite Earths, pre-Flashpoint continuity), some of Guggenheim's Facebook followers noted that it actually looks more like a wrestling ring, since boxing rings commonly have four ropes, not three.

Famous wrestlers in the DC Universe? Well, arguably the most interesting one is Lester "Rocky" Davis, a member of the Challengers of the Unknown, a team of adventurers who, having cheated death once, are living on borrowed time and vow to live their lives to the fullest.

There are, of course, other wrestlers in the DC Universe, including Stormwatch member Toshiro Misawa, a former sumo wrestler, and some iterations of Killer Croc in which he was a wrestler before coming to Gotham.

Arrow Set Photo Gets Fans Wondering: Is Wildcat Coming? Or Challengers of the Unknown?