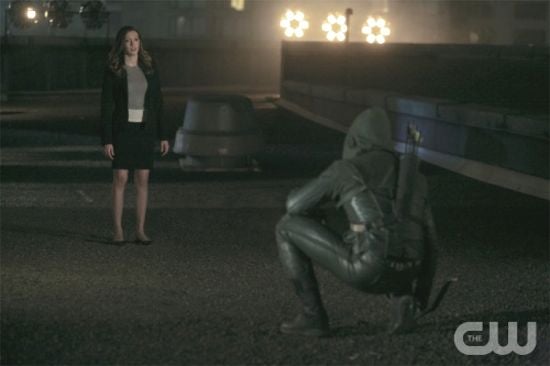 The first three episodes of Arrow have firmly established the show as a hit, already winning a full season pick up from The CW. The fourth episode of Arrow looks to continue the success streak. Interestingly enough, the sneak preview for this episode of Arrow references Blüdhaven, which is Nightwing's adopted hometown. Could a Nightwing cameo be in Arrow's future? The fourth Arrow episode is entitled "An Innocent Man." According to The CW description, "Oliver still hasn't figured out how to get back in Laurel's good graces, but a late night bonding session with Thea gives him the inspiration he needs. Looking into a suspicious murder case, Oliver realizes an innocent man, Peter Declan (guest star Lane Edwards), was framed by one of the targets on his list. As Arrow, he asks Laurel to help prove Declan's innocence. Meanwhile, Walter (guest star Colin Salmon) asks one of his employees, Felicity Smoak (guest star Emily Rickards), to look into a $2.6 million withdrawal that Moira made without his knowledge." Vince Misiano directed the episode which was written by Moira Kirland & Lana Cho. The "An Innocent Man" episode of Arrow airs on The CW on Wednesday, October 31 starting at 8 PM ET.