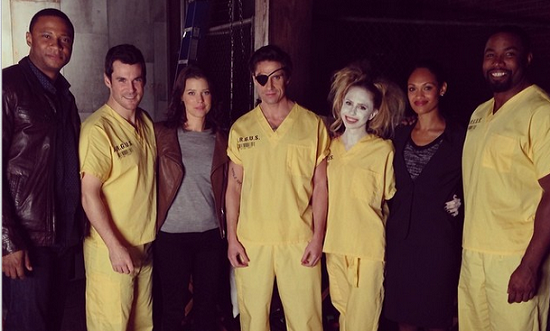 With Arrow entering a five-week period without re-runs building to the second season finale this week, we got to thinking: could the villain at the heart of this season -- Slade Wilson, better known as Deathstroke -- end up joining the Suicide Squad, and thus being kept around for future seasons and future conflicts? It makes sense: Slade's presence on the Island may or may not end this year, and even if they do "kill" him there, fans already know he didn't die, so over the next few seasons the fan-favorite Manu Bennett could be retained as a recurring guest star, even if he's downgraded out of "the series' main villain" at the end of this year. If they keep him around next season -- let's say for the sake of argument, he's making his way off the island, challenged by the brutality and pain of the open sea, as he described in "Deathstroke" two weeks ago -- they could mirror that in the current day by showing him struggling to adjust to his life in incarceration, and/or as part of the Squad. The likelihood that S.T.A.R. Labs helps Team Arrow find a way to counteract the effects of Mirakuru and make Slade a more manageable threat seems like a pretty good one -- especially with this week's episode, "The Man Under the Hood," being a break from the non-stop action of last week that introduces The Flash's S.T.A.R. techs Cisco Ramon (Vibe) and Caitlin Snow (Killer Frost). Even without his powers -- or with a fraction of them -- he would still be a formidable threat, as we saw on the Island before he ever got the Mirakuru shot. 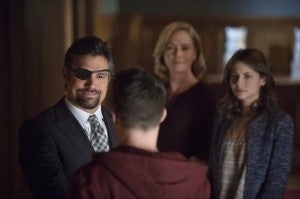 Of course, as much as Slade makes sense as a Suicide Squad member, we might get a different Mirakuru-fueled Squad member: Roy Harper. Here's the official description for "Seeing Red," next week's episode: ROY SPINS OUT OF CONTROL — The Mirakuru sends Roy (Colton Haynes) into an uncontrollable rage and he unleashes on the city. After Roy's deadly fight with a police officer, Oliver (Stephen Amell) realizes the mirakuru has taken over Roy completely and must figure out a way to stop him. Things get more complicated after Sara (Caity Lotz) declares that Roy is too far gone and the only way to stop him is to kill him. Meanwhile, Thea (Willa Holland) believes she can breakthrough to Roy so she goes on camera at Moira's (Susanna Thompson) campaign rally to lure him to Verdant. Her ploy works but after Roy attacks Thea, Team Arrow unleashes on him. Doug Aarniokoski directed the episode written by Wendy Mericle & Beth Schwartz (#220). Granted, there's no chance Roy is going to be killed...we've already been told he'll be Arsenal one day...but that doesn't mean he might not have a sentence to work off once he "unleashes on the city." That sounds like the kind of thing Amanda Waller could use to her advantage, especially since it seems from "Suicide Squad" that the odds of Diggle ever working with Task Force X again are not great (not only did he disagree with their approach, but he and Lyla broke protocol and caused Waller to lose face). 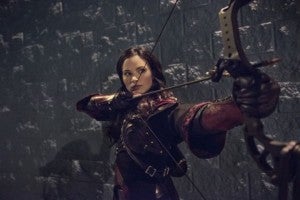 Of course, there's the matter of Harley Quinn, too. We got a cameo by the popular Batman supporting character, and while it seems unlikely we'll get her on Arrow full time, never say never: DC seem to be rebranding her as her own character, a bit more independent of The Joker, possibly for the express purpose of marketing the Suicide Squad across other media (there's already a video game in the works, and reports that they're the subject of one of a number of scripts being developed at DC Entertainment for what are rumored to be mid-budget action movies). NOTE: The above mention about a video game refers to a project that's been in and out of development for ages, but which has been bolstered by the teaser at the end of Batman: Arkham Origins. This article is not meant to confirm anything that isn't already out there in that regard. Of course, if they were to use her again, it would be hard to explain away Tara Strong's voice and Cassidy Alexa's body. More likely, they would cast with a more famous face and we would lose both. And then, of course, there's the villains we haven't seen yet. Before Suicide Squad ever comes back in Season Three (we assume they will, since they're reported to play a role in the finale), we assume that Isabel Rochev and Sebastian Blood will both have been either killed or captured (since even the former is sporting a costume in set photos). The Huntress already is in custody, and it wouldn't be surprising to see her do a one-off mission with the Squad and earn her freedom so that she can be used again down the line, either in Birds of Prey or in a solo capacity. Nyssa Raatko, who is a criminal wanted by A.R.G.U.S., has also been said to appear once more before the end of the season, who knows how that will play out?

Arrow: What Will The Suicide Squad Look Like Next Year?