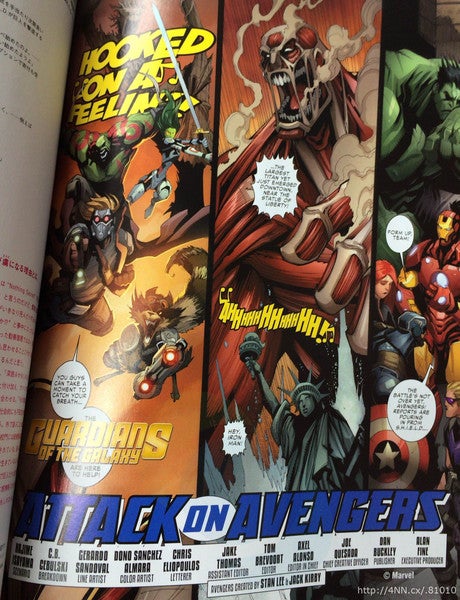 Specific details on the "Marvel/Attack On Titan" crossover have finally emerged, including the news that The Guardians of the Galaxy will also take part in the tale.

Through Anime News Network, we now know that the Marvel Universe/Anime mashup will feature The Guardians of the Galaxy, The Avengers, Female Titan, Colossal Titan, Armored Titan, and more in a New York City-based story. Past artwork has confirmed that Spider-Man will also participate in the story.

Details on the story's creative muscle have also surfaced. Attack on Titan creator Hajime Isayama will provide the "Scenario" (which we assume is the plot), Marvel's Senior Vice President of Creative & Creator Development C.B. Cebulski will provide the "Breakdown" (which we assume is the actual scripting), and artist Gerardo Sandoval will provide the art. Marvel's Executive Editor Tom Brevoort edited the series, with fellow Marvel editor Jake Thomas assisting. In an introduction to the comic story, Cebulski teased that a major Titan characters could die in the crossover, saying that "Nothing is sacred."