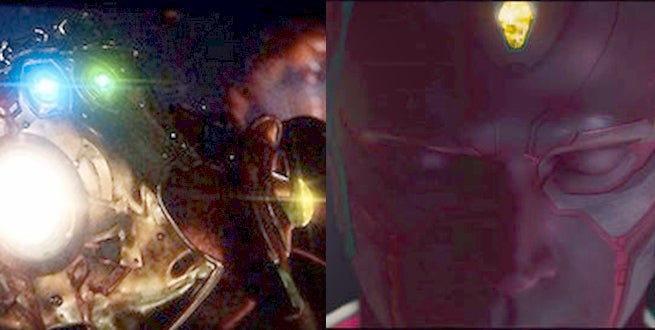 The Infinity Stones: the most enigmatic part of the Marvel Cinematic Universe to the average moviegoer, and the most "OMG WTH HOLY CRAP" part of the MCU for the average fanboy and fangirl. The Infinity Stones are what link the MCU together, and are the building blocks for Thanos, that purple-chinned monster, and his coming reign of terror. Indeed, even the average fan knows that the third Avengers film will be split in two, called Avengers: Infinity War, and those stones, those stones, those stones. With the release of a new Avengers: Age of Ultron trailer, we may have gotten a vision of yet another stone, or at least that's our theory.

First, let's recap what we've seen so far. The first was the Tesseract aka the Cosmic Cube, which Marvel President Kevin Feige confirmed as the Space Stone. The second confirmed one appeared just last year, the "Orb" that everyone was after in Guardians of the Galaxy was confirmed by writer/director James Gunn as the Power Stone. Thanks to the knowledge of those two, we have our educated guesses for the other two that we know are Infinity Stones even if we don't have confirmation of their identities. The Aether seen in Thor: The Dark World is probably the Reality Stone, giving its wielder the ability to alter the world around them to their whim. The stone embedded in Loki's staff is probably the Mind Stone, as we saw him use it for plenty of mind control in The Avengers.

That leaves us with two, provided the movies go with the six-stone method the comics follow, which the shot of Josh Brolin's Thanos wielding them all together seems to confirm:

The final two stones, then, are the Soul and Time Stones.

In the comics, the Soul Stone (or gem, as they're typically referred to on the printed page) is often found embedded in the forehead of a character, though not the one we see in the new Ultron trailer. In the comics, it's found on Adam Warlock's face. The character is enigmatic, an artificially created "perfect human" linked very much to the cosmic realms of the Marvel universe. He also sometimes switches sides, as the evil Adam Magus. While Warlock's cocoon was featured as an easter egg in Guardians, we're betting he'll be pushed aside a bit, if only to have the next Stone introduced in the marquee Avengers franchise.

In Marvel fashion, the third trailer for Avengers: Age of Ultron features a "post-credits" sequence, giving fans their first official, Marvel Studios sanctioned look at The Vision. In the comics, the Vision is created by Ultron, as his proof that he has moved so far beyond humanity that he in fact can create life on his own. While he tries to use Vision against the Avengers, the "synthezoid" artificial life has the ability to think for himself, eventually becoming a member of the team and helping them defeat his creator. He gains his emotions and in a way his soul from a hard-to-transfer-to-film mind copying process involving Simon Williams, who hasn't yet appeared in the MCU. 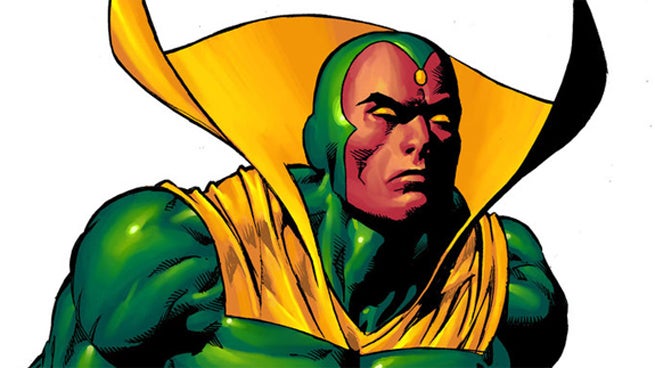 The comic book Vision has a gem in his forehead, a "solar jewel" that powers him by absorbing and processing solar energy. But we think things may be different in the MCU. This is the perfect place to marry two comic book concepts, making the Vision, and by extension Age of Ultron, instantly important and essential parts of the movie universe. You see, instead of a solar jewel, you simply give Vision the Soul Stone. It brings him to life, gives him a conscience, and of course, paints a target on his head for the eventual big bad Thanos. 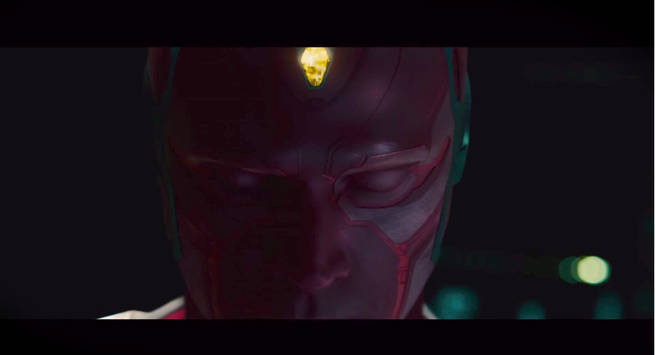 An infinity stone with the ability to bestow life to a robot fixes multiple problems for the MCU. With Ultron's shifted origin, Vision's origin must shift as well. While introducing a brand new character and initiating a personality transfer isn't too outrageous for the films, it does cause a problem when you're already introducing Ultron, Scarlet Witch, Quicksilver, The Vision, and other new supporting cast – it's just one more person to share screentime. And while cosmic fans may get excited about the possibility of Adam Warlock jumping into the fray later, the meta-narrative of Thanos and the Infinity Stones almost demands a new one to be introduced in Age of Ultron.

Indeed, in the image of Thanos and the Infinity Gauntlet used during the announcement of the third and fourth Avengers films, with every stone in place, the one on his thumb sure looks like it is the exact same shade of yellow and even the same size (a distinction that isn't necessary, but makes this all the more intriguing).

If we're right, and The Vision does have the Soul Stone, that only leaves one: Time. Doctor Strange is said to introduce other dimensions and realities into the mix – sounds like the perfect spot for the final stone, doesn't it? But that's a theory for another day.

What do you think? Is that the Soul Stone? Sound off with your theories in the comments!

Avengers: Age of Ultron Theory: Vision and the Soul Stone