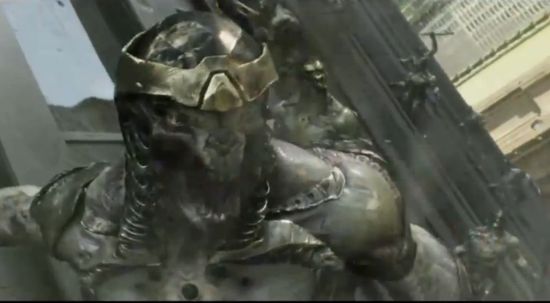 So now we have a close-up picture of one of the Avengers aliens from a TV spot on Fandango. With this full frontal facial shot, we have to be able to identify Loki’s army, right? Well, not exactly. The Avengers aliens look sort of similar to a number of alien races in Marvel Comics, but not exactly like any one of them.

Another popular theory is the Badoons. The Avengers aliens greenish skin color is a good match for the Badoons. The face is a little different than how Badoons have typically been portrayed in comics, but maybe some liberties were taken for the theatrical version. There are also some other features that appear to match like the pointy toes and the pointy ears.

One other theory suggests that the alien race is somehow tied to Thanos. There have been rumors for awhile that Thanos is a mystery villain in The Avengers. While the face of this alien doesn’t look anything like Thanos and the skin color is wrong, the helmet is a dead ringer for Thanos.

Between these three theories, they all seem to be close, but just not quite right, which led us to come up with the following theory. What if Beta Ray Bill mated with the Badoons and dressed his offspring like Thanos? It’s the only answer that makes sense at this point. Avengers mystery solved.

Avengers Aliens: What If Beta Ray Bill Mated With The Badoons And Dressed His Offspring Like Thanos?

Cherry: Tom Holland Reveals How the Russo Brothers Pitched the Movie to Him

Riverdale Recap: Everything You Missed in Season 5 Premiere