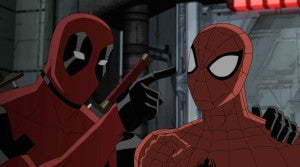 It's the most anticipated new animated series to launch this year, reuniting Marvel's most iconic Super Heroes – Iron Man, Thor, Captain America, Hulk, Hawkeye, Black Widow & Falcon! It's the team that took the world by storm in Marvel's The Avengers, so no fan can miss the action-packed adventures of Earth's Mightiest as they protect the Marvel Universe from the biggest threats they've ever seen – all while working together as a team. The world's most dangerous Super Villains don't stand a chance when the Avengers Assemble! In this blockbuster season premiere, the rookie Falcon stands alone to save his team and stop a full-scale invasion of Earth after the Avengers fall victim to the body-swapping Space Phantoms! Don't miss the action packed premiere episode of MARVEL'S AVENGERS ASSEMBLE  this Sunday at 11a/10c inside Marvel Universe on Disney XD.

Following the Sunday premiere of Marvel's Avengers Assemble, Deadpool takes over Marvel's Ultimate Spider-Man as only he can. When the Merc with the Mouth's penchant for making things "unalive" brings Spidey to face him head on, Deadpool knows just what to do…. DANCE! Don't miss Marvel's Ultimate Spider-Man DEADPOOL this Sunday at 11:30am/10:30c inside Marvel Universe on Disney XD.

Zack Snyder Confirms Title for Army of the Dead Sequel

Bugsnax: The Isle of Bigsnax Announced

Zack Snyder Reveals Which of His Movies He Considers "The Snyderverse"